I apologize for not writing much in the week and a half since I got back.  I've been busy with work and other things (been to two more baseball games since I've been home) and I've been struggling to figure out what and how I want to write about the trip.  I think the posts will end up falling into three categories - an overview of the trip (which will take several posts), posts for each card shop I visited and posts on the cards I brought back.  I'll start the overview here.

On Thursday, May 23rd I flew from Baltimore to Toronto and then on to Tokyo.  I arrived at Haneda Airport on the afternoon of May 24th and after waiting in several different lines at the airport (going through customs, picking up my rental wifi device and picking up my JR Rail Pass) I headed to my hotel.  I was staying at the Nippon Seinenkan Hotel which is located across the street from Meiji Jingu Stadium.  I got to my hotel almost 24 hours to the minute after leaving my house. 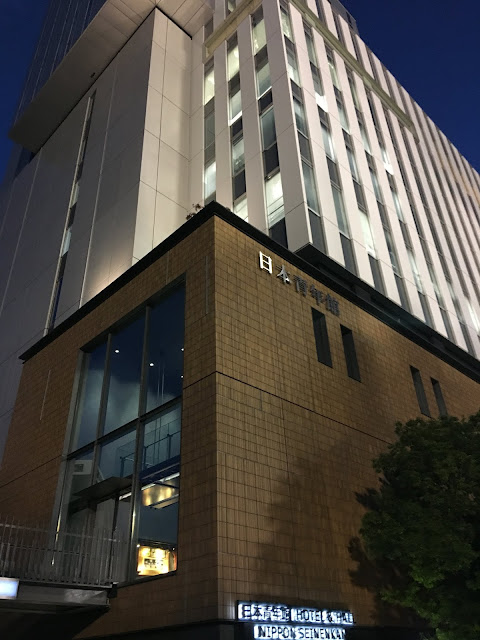 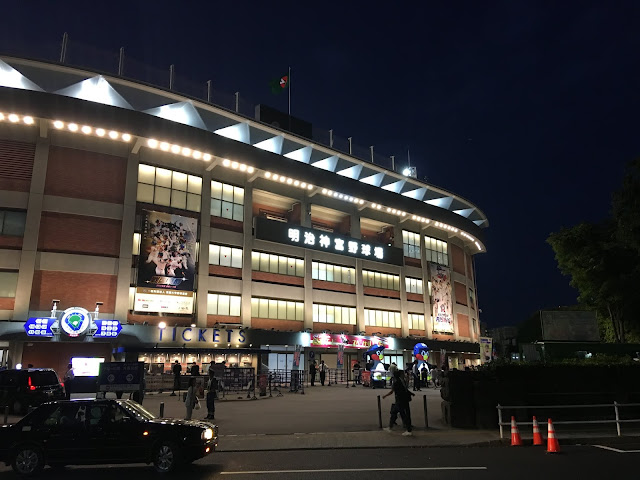 There was a game between the Swallows and Dragons going on at Jingu that night and if I had gotten a room on the "Jingu side" of the hotel I'd have been able to watch it.  Unfortunately my room was on the other side of the hotel.

After checking into my room and freshening up a little I went out to look around a little and get something to eat.  I walked down the street to the Swallows team store to see if they were selling any baseball cards.  They weren't but the Family Mart on the ground floor of the hotel had this display of Calbee packages up: 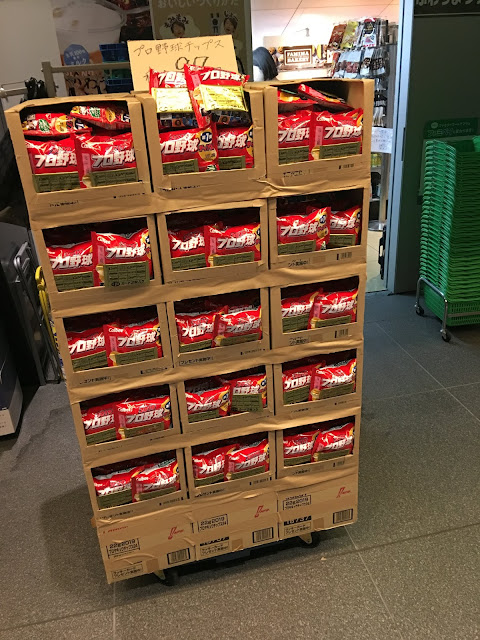 These were all Series One packs and since I already had the complete set I didn't buy any chips.  Still it was good to see they were available.

I checked out of the hotel relatively early the next morning.  The lobby of the hotel is on the eighth floor of the building and has a great view of Jingu Stadium:

There's actually four stadiums visible in this shot.  From left to right is the Olympic Stadium (still under construction), Jingu Seconday Stadium, Jingu Stadium and Chichibunomiya Rugby Stadium.  There was a Rugby game with the Japanese National Team scheduled for the next day and apparently a number of the players were staying at my hotel - I had briefly spoken with one the night before.  He was from Fiji originally and had attended college in New Zealand so he spoke English very well.

I had some running around to do that morning.  I was planning on attending the two Tokyo Big 6 college games at Jingu starting at 10:30, going to Shinjuku for a little bit after the games and then taking the Shinkansen up to Sendai that evening.  I needed to do something with my suitcase for the day.  I considered leaving it at the hotel while I was at the college games but I didn't want to schlep it to Shinjuku afterwards, especially since I'd have to find a locker for it in Shinjuku which might be difficult in the late afternoon.  I decided to go to Tokyo Station and store it there, since I'd be catching the Shinkansen from there.  Going to Tokyo Station would allow me to take care of getting my tickets for the Shinkansen as well.

I had an unpleasant surprise when I got to Tokyo Station however - all of the storage lockers were unavailable.  The President was going to be visiting in the next couple days and as a security precaution no one was allowed to store luggage at Tokyo Station or any of the nearby stations for the duration.  I decided that since I'd be going to Shinjuku later I'd head over there now and find a locker which is what I did.  I then headed back to Jingu Stadium - my running around took me roughly 90 minutes to get back to where I had started from. 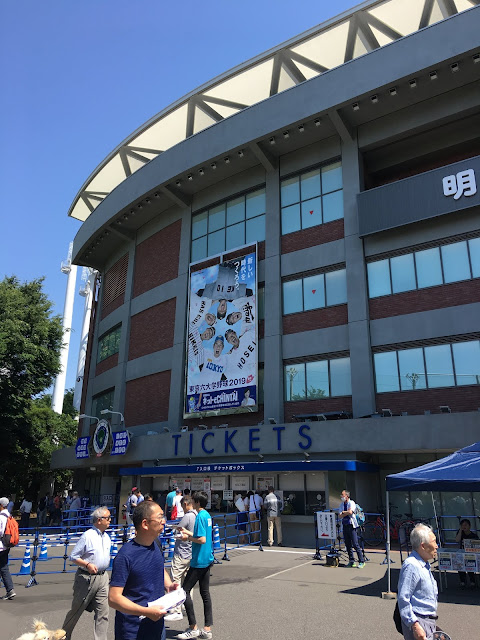 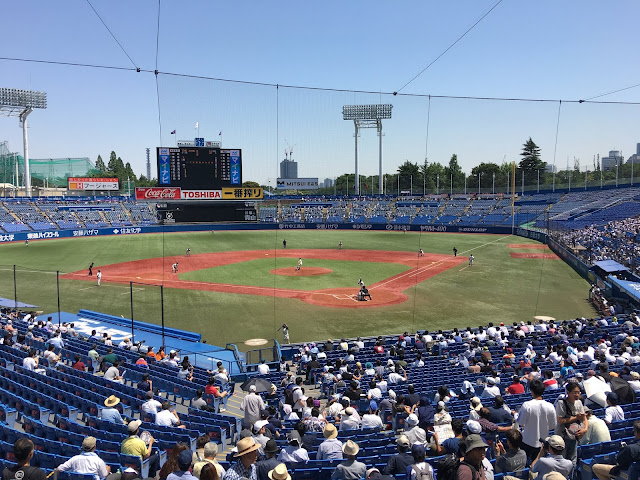 The first Tokyo Big 6 game was between Meiji and Hosei and was one of the best games I saw the entire trip.  Meiji built a 3-0 lead over the first six innings.  Starting pitcher Masato Morishita didn't allow a hit until the top of the sixth.  Hosei tied the game in the top of the eighth though on a three run pinch hit home run by Seiichi Nakamura and went ahead 4-3 in the top of the ninth.  With two outs in the bottom of the ninth, Meiji first baseman Makoto Kitamoto hit a solo home run to tie up the game at 4.  Since the Swallows were scheduled to play at 6 that evening the college games were not allowed to play extra innings so that's how it ended. 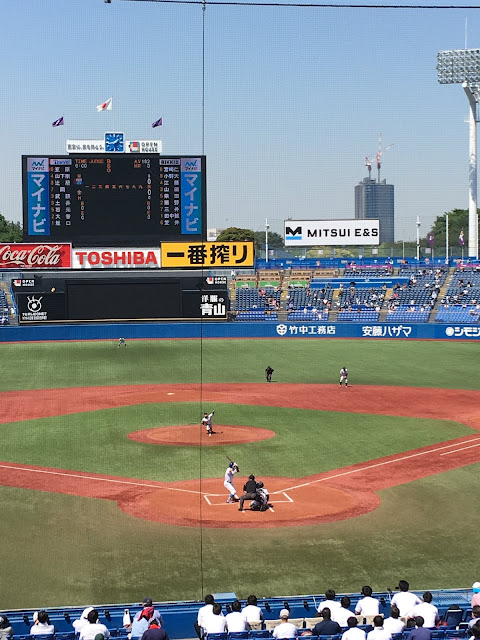 The second game was between Rikkio and Tokyo and wasn't nearly as interesting.  Tokyo has traditionally been the doormat of the league and this year was no exception - they went 0-10 on the spring season.  Rikkio starter Seiya Tanaka threw a complete game, defeating Todai by a score of 4-0.

Meiji defeated Hosei the next day to clinch the Tokyo Big 6 championship.  Morishita ended up being voted MVP of the league and Tanaka came in second.  I was pleasantly surprised to realize that both of them appeared in the Japanese Collegiate All Stars cards from the 2019 Panini Stars & Stripes set:


After the games were over I headed for Shinjuku.  I stopped off at Mint Shinjuku, my first card shop of the trip.  I'll write about them in a separate post.  After leaving the shop there was a landmark there I needed to see: 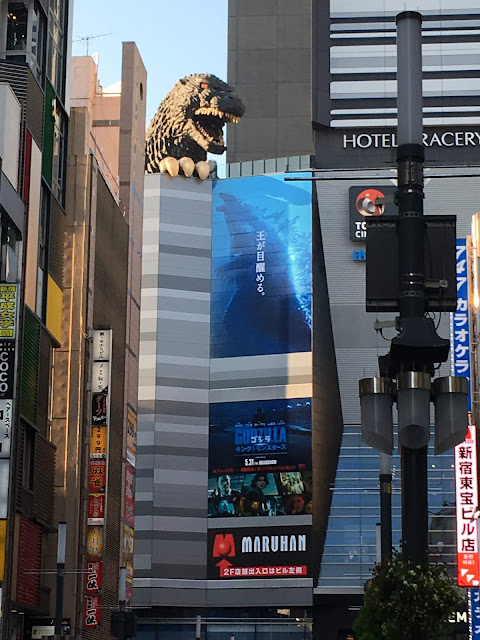 Despite the poster this is not a promotion for the new movie - it's a permanent fixture.

I had a scary couple minutes when I went back to Shinjuku Station to pick up my suitcase - I couldn't find the locker I had stored it in!  I had a receipt that told me the locker number but I couldn't find it.  After wandering around for about 20 minutes I finally asked the man who was running the left luggage stand who explained to me that the locker I wanted was in the South Concourse while I was in the East Concourse.  He showed me how to get to the other Concourse and I was able to quickly find the correct locker.  Once reunited with my suitcase, I headed back to Tokyo Station in time to grab some dinner before catching my bullet train to Sendai.  It was about 10:30 that evening before I checked into my hotel in Sendai, putting an end to a long first day in Japan.
Posted by NPB Card Guy at 9:33 PM

Glad to see the trip posts are starting!!

Love the view from the hotel, as you say it is too bad they put you on the side facing away from Jingu.

I've been to that corner where you can see Godzilla before, its one of my favorite Tokyo views.

Awesome write up! I always seem to get turned around in Shinjuku Eki. Looking forward to the future posts!

As someone who has never been overseas, I really enjoy reading posts like this, and will be looking forward to the rest of the series. Oh, and how did I never know of that Godzilla before?!?!

There are three Godzilla statues I know of in the Tokyo area - this one, a small one in Hibaya and a roughly six foot tall one at Toho Studios. This was the only one that I saw this trip although I saw the one in Hibaya back in 2013.