I placed yet another vintage card order with the vintage toy store Mandarake a couple weeks ago and the package showed up yesterday.  I thought I'd do a quick post to show off what I got.

I always like getting a card that commemorates a specific event and I was happy that among the five cards I picked up, three of them were from famous events.  The first one shows Shigeo Nagashima approaching home plate after hitting his 444th and final home run on the day of his retirement game, October 14th, 1974 at Korakuen Stadium in Tokyo:

One year and one day later, the Hiroshima Toyo Carp defeated the Yomiuri Giants at Korakuen Stadium to clinch their first ever Central League pennant.  This card shows Koji Yamamoto celebrating after the win:

On June 13, 1987, Sachio Kinugasa of the Carp played in his 2131st consecutive game, eclipsing Lou Gehrig.  I have other cards that celebrate this event but this is the first one I have that was issued that season:

The other two cards didn't commemorate famous events - I just liked the look of them.  I'd been interested in finding this 1985 Hiromitsu Kadota card ever since I first saw it last year on Sean's blog:

The other card I got is this 1977 card of Tsutomu Wakamatsu and it's a bit of a puzzle:

The puzzle has to do with figuring out which of the several 1977 Calbee sets this card goes with.  Here's the back of the card: 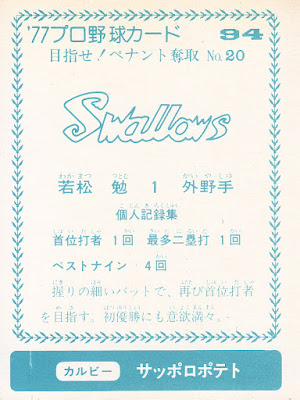 The card is #94 and the back of the card is consistent with the set that Engel lists as "JC5c: Pro Series".  But he lists card #94 as being Isao Shibata.  The checklist for the 1977 set that's in the 1973 Calbee Book also lists card #94 as Shibata (which isn't a huge surprise since I think this was Gary's source for the 1977-79 Calbee checklists).  What I don't know is if this is some sort of variation (wouldn't be the first time there are multiple cards with the same number in a Calbee set) or if the 1973 Calbee book's checklist was just wrong.  It's a bit suspicious to me that Shibata is also card #94 in a different 1977 Calbee set - the "JC 5f: Giants Series" - maybe there was some confusion about the sets somewhere along the line.

Once again the cards were incredible reasonable.  At 500 yen the Wakamatsu card was the most expensive, followed by the Nagashima card at 400 yen.  The two Carp players were 200 yen apiece and the Kadota was a steal at 100 yen!  So the total for the five cards was just 1400 yen and SAL shipping was 690 yen for a grand total of 2090 yen (which worked out to just around $20).  I placed the order on New Year's Day and the cards showed up yesterday so it took exactly three weeks to get to me.

I love that Nagashima card, and glad you scooped a copy of the Kadota too :)

That is a mystery about the Wakamatsu/Shibata card #94. Its definitely a card from the 1977 JC 5C set. I think the simplest explanation is that the guide is just plain wrong (or its an unknown variation but I think that would be a fallback explanation!)