Card Of The Week January 19 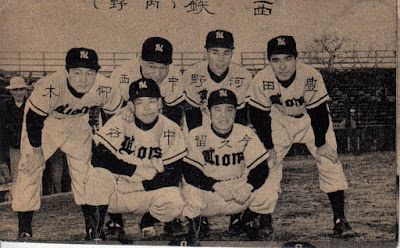 This is another card I picked up off of Ebay recently (actually from the same seller I got the Fujiya Caramel Premium card of Andy Miyamoto).  It shows a group of players from the Nishitetsu Lions.  Again I couldn't find it in Engel so I had to do a little detective work to see what I could figure out about it.

The first thing I noticed was something I'm not sure I've ever seen on a Japanese card before.  Usually when a card has the player's surname on it in kanji it goes either top-to-bottom or left-to-right.  But the kanji on this card goes from right-to-left!  For example, the player second from the left on the top row is Futoshi Nakanishi who's kanji for his surname is "中西".  (And there's no one on the roster named Nishinaka.)  The kanji for the team name at the top of the card (the two characters that are not in parentheses) also go right-to-left.

From left-to-right on the top row the players are Akira Ohgi, Nakanishi, Akinobu Kono and Yasumitsu Toyoda and on the bottom row they are Jiyunji Nakatani and Sunao Imakurusu.  Imakurusu made it easier to narrow down the time frame of the card as he only played for the Lions in 1955 and 1956.

The card is blank backed and is about 3 by 1 3/4 inches.  The set it looks the most like is something called  "JBR 29: 1956 Tobacco Menko Sized".  This set shows the transition between bromides and the "tobacco menko" cards that dominated the Japanese card market in the late 1950's and early 1960's.  Engel's comment about this set is that "These cards have the appearance of B&W menko on the fronts, but they are blank backed and have no menko numbers or paper/scissors/rock symbol, so they must be classified as bromides".  It possible that this card is not from this set but it's definitely a transitional form between bromides and menko.
Posted by NPB Card Guy at 1:20 PM

These blank-backed bromides are a pain to catalogue. I have close to a thousand sumo wrestling ones that I have been trying to catalogue for some time. Very time consuming.

That is pretty neat.

It was only in the 50s that Japan started to be pretty consistent in writing stuff from left to right, before that its not uncommon to see signs, posters, etc written the opposite way.

With books, they still do it the opposite way (start reading on the upper right corner, then read downward and move to the left line by line).