Continuing my posts of stuff I got last week from Kenny of "Torren' Up Cards"...

Kenny included four BBM box sets in the package.  The earliest one of them was the "Icons - Ace" set from 2015.  This was the third installment in BBM's annual "Icons" sets and the theme (which you can probably guess) is "ace" pitchers.

The set has 36 cards which as usual are split up evenly so that there are three cards for each of the 12 NPB teams.  What's kind of odd about the set is that there's three different card designs in use in the set.  Each team has one card using each design.  All the pitchers using one of the designs appear (very loosely) to be "veteran" pitchers while all the pitchers for another design appear (again very loosely) to be "in their prime" pitchers while all the pitchers with the final design appear to be "prospects" (including seven rookies).  As I said, these categorizations are very loose as there are 2012 draft picks who appear in all three categories (Takahiro Norimoto is a "veteran", Shohei Ohtani is "in his prime" and Tomoyuki Sugano and Shintaro Fujinami are "prospects").


Other pitchers in this category include Daisuke Matsuzaka and Hiroki Kuroda (both of whom had just returned to Japan from MLB in 2015) plus Masahiro Yamamoto, Chihiro Kaneko, Daisuke Miura and Toshiya Sugiuchi.

Here's a couple of the "in their prime" pitchers:


Some of the others in this category are Ayumu Ishikawa, Randy Messenger, Yudao Ohno, Takayuki Kishi and Yuki Matsui.

Here's a couple of the "prospects" (both are rookies in this case):


Other "prospects" include Daichi Ohsera, Kohei Arihara and Yasuaki Yamasaki.

You can see all the cards over at Jambalaya. 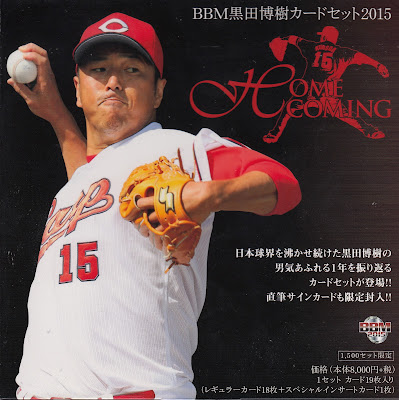 Chronologically the next set is the 2015 Homecoming set.  This was a box set dedicated to Kuroda's 2015 season.  I'm not going to say much about the set here since I wrote about it when I got a copy of this set from Ryan a few years back but I will point out that once again you can see all the cards at Jambalaya. 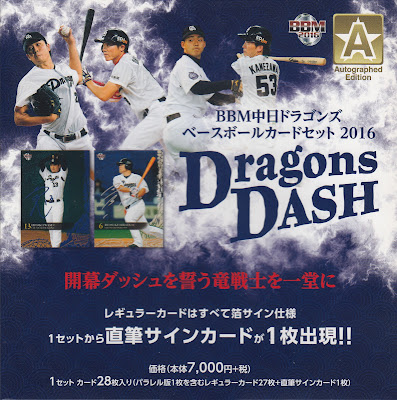 Next up is the 2016 Dragons Dash set.  This is one of BBM's "Autographed Edition" team box sets.  Originally this set contained the full 27 card base set plus one autographed card.  Kenny blogged about the set when he got it a couple years back - he had an unopened set and had pulled an autographed card of Tetsuya Tani out of it.  He kept the autographed card (can't complain about that) and just passed the base set along to me.  Oddly enough the base set does not include a card of Tani!  It does feature most of the Dragons stars at the time including the since retired Masahiro Araki, Hitoki Iwase, Takuya Asao and Mashiko Morino as well as Yudai Ohno, Ryosuke Hirata, Dayan Viciedo, Shuhei Takahashi and Yohei Ohshima.  Here's a couple sample cards:

It's a nice looking set with full bleed photos with a Dragon overlay and a blue facsimile signature.  As always you can see all the cards here. 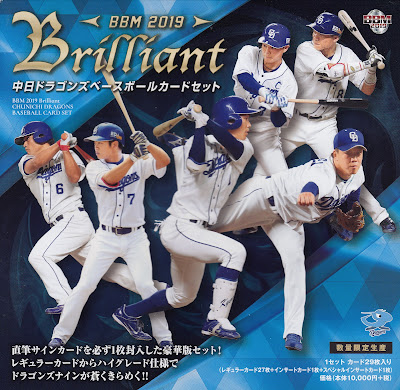 The final box set Kenny sent me was the Brilliant Dragons set that just came out a couple months ago.  Like the Dragons Dash set, this set had a 27 card base set.  Unopened sets also contained an insert card and an autographed card but this time Kenny didn't get an unopened set.  He didn't send me the complete base set this time - he kept three of the cards - Akira Neo, Raidel Martinez and Joely Rodriguez.  He included a note apologizing to me for keeping the three cards - I was going to write something about not accepting his apology and finding it completely unreasonable of him keeping three cards for himself out of the 500+ plus cards he had sent me for free but sarcasm doesn't always come across well in print so I'll just say that obviously his apology was totally unnecessary.  The 24 remaining cards include Ohno, Hirata, Viciedo, Takahashi and Ohshima as well as Daisuke Matsuzaka, Yota Kyoda, Daisuke Yamai, Hiroshi Suzuki, Enny Romero and Zoilo Almonte.  Here's some example cards:

And once again all the cards (including the three Kenny kept) can be seen at Jambalaya.

Thanks again for the cards, Kenny!  I'll have one more post featuring cards he sent me.
Posted by NPB Card Guy at 9:00 PM

I've had this package in the works for so long that I can't even remember what the third portion could be lol.