Sports Graphic Number* is a magazine publisher in Japan that also published 10 baseball card sets between 2011 and 2017.  Their sets were rather unique as all but one of them featured just a single player (the other one featured two players) and unlike most of BBM's single player sets they weren't biographical.  Instead they simply featured cards showing current photos of the player.  Some of the cards were puzzle cards that would form a large picture when grouped together.

*Their website is labelled Sports Graphic Number Web, not to be confused with Number Wang

I'd never gotten any of these sets.  Not that I didn't like their looks or anything but I can't collect EVERYTHING so I have to draw the line somewhere.  But now I have some of them because the final thing in the box from Kenny was a bunch of cards from three of the sets.

Sports Graphic Number's final three sets were dedicated to Carp pitcher Hiroki Kuroda (ok, one of them was to Kuroda and fellow Carp Takahiro Arai).  I mentioned the other day that Kenny was a big fan of Kuroda so it should come as any surprise to discover that the cards he sent me were all from these three sets.

The first Kuroda set was released in early 2016.  The base set contained 45 cards and there were an additional 18 "special" (i.e. insert) cards.  Kenny sent me 15 of the base set cards, one of the "special" and two serially numbered "rare" cards.  Here's the front and back of card #26: 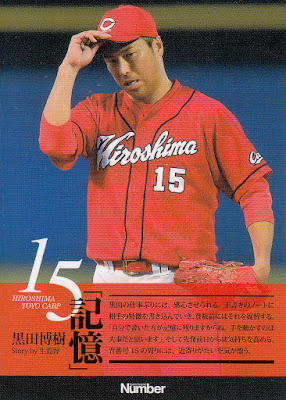 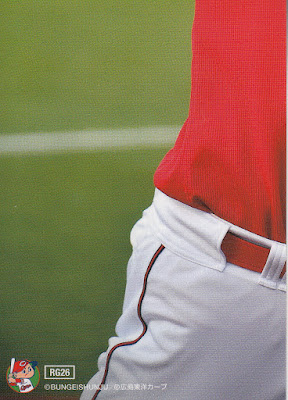 You can see that the back is part of a puzzle and it's kind of odd on its own.  But luckily Kenny sent me cards #37 to #45, the fronts of which form a complete puzzle: 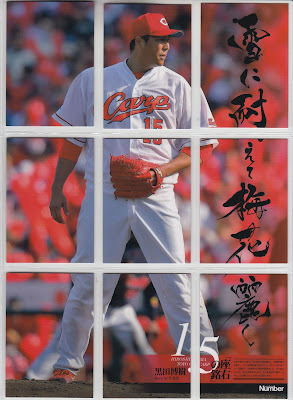 And as an added bonus, some of the cards on the BACK of these nine cards form another puzzle: 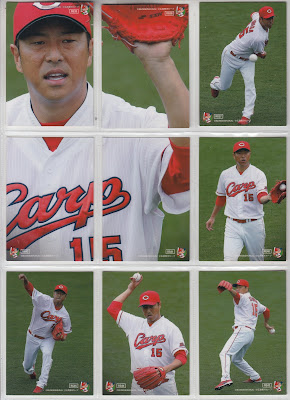 Here's the "special" card and the front and back of one of the "rare" cards as well: 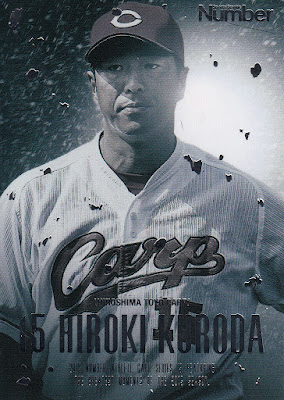 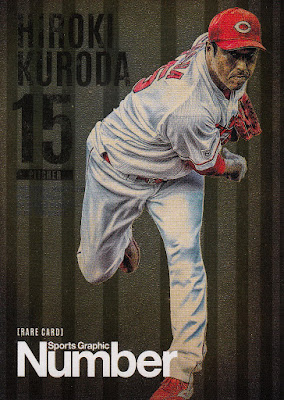 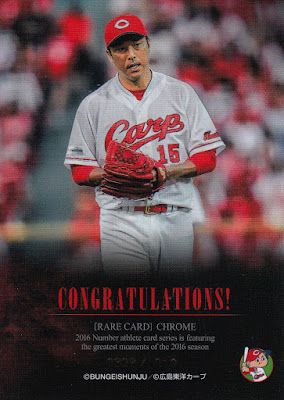 The second set he sent me cards from was the one with Kuroda and Takahiro Arai.  It was called something like "15 Hiroki Kuroda x 25 Takahiro Arai" and was released in the fall of 2016.  It was to commemorate Kuroda reaching his 200th career win between MLB and NPB and Arai getting his 2000th hit, both events happening during the 2016 season.  The base set contained 72 cards and there were an additional 27 "special" cards (9 with Kuroda, 9 with Arai and 9 with both of them).  Kenny gave me eight base set cards (all of which featured Kuroda) and three of the "special" cards (all of which had both players).  None of the base cards I got form a puzzle.  This card (#33) shows Arai congratulating Kuroda on his 200th win: 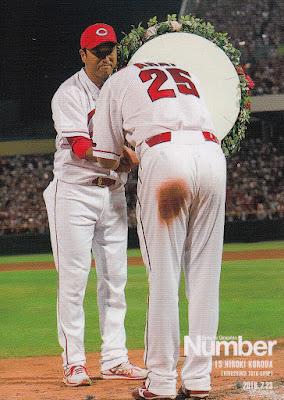 And here's one of the "special" cards: 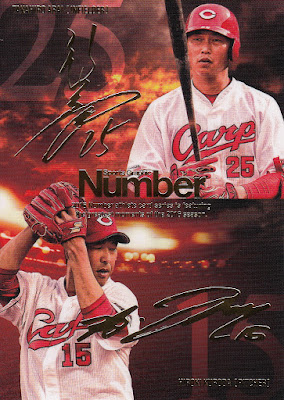 Sports Graphic Number's final Kuroda set (and so far final set altogether) was issued in early 2017 and commemorates his retirement.  It's called something like "Tears, Flower, Path" and had a base set of 72 cards plus 18 "special" cards.  Kenny not only gave me the entire base set but he also included all 18 of the "special" cards.  Here's the front and back of card #1 in the set as an example: 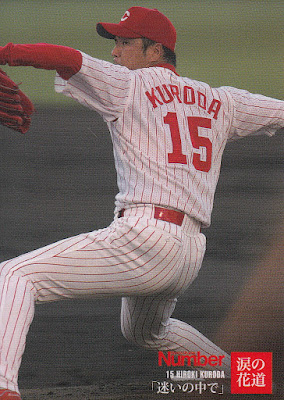 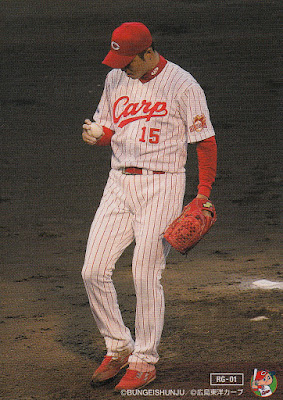 As in the earlier sets, groups of cards in this set form puzzles.  There are two nine card puzzles.  The first of these is formed by the backs of cards #28 to #36: 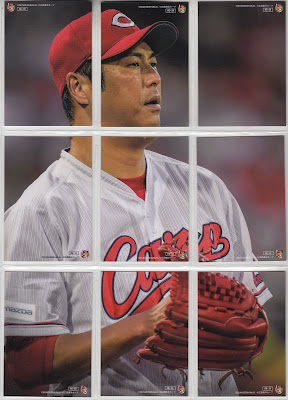 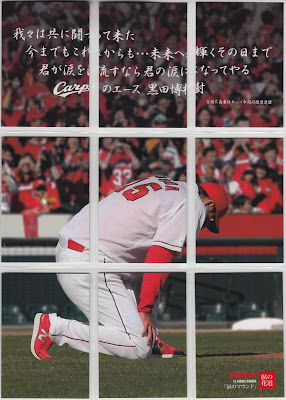 There were two types of "special" cards - 9 white cards with gold overlays and 9 reddish cards with a metallic finish.  The backs of the cards showed the same image as the front but it's the original, untouched image.  Here's a couple examples: 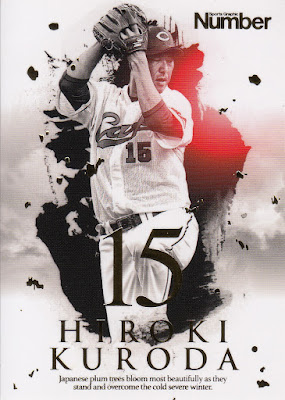 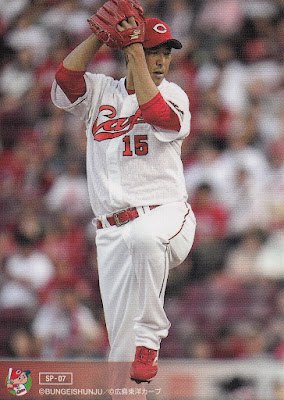 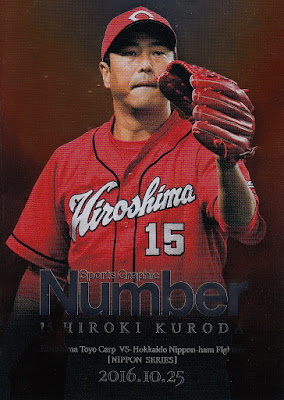 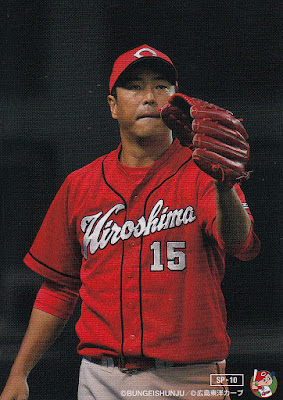 Not really sure what else to say about these cards.  I don't think I need to run out and complete the two incomplete sets or get any of Sports Graphic Number's earlier sets but they are pretty neat.

Almost forgot - there was one additional card Kenny sent me.  At first glance I thought this was a card of Kenny's favorite player, Luis Torrens, from a Staten Island Yankees team set. 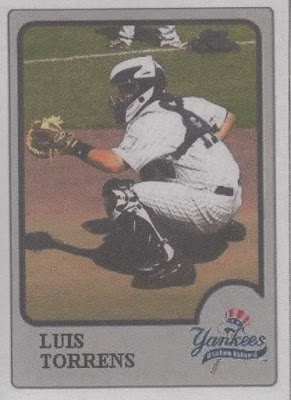 But when I looked at the back, I realized I'd been Zippy Zapped! 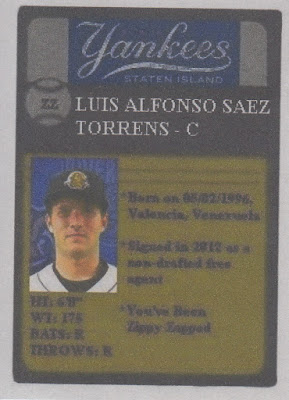 Thanks again for all the cards, Kenny!  Since you're trying to cut down on the number of cards in your collection I'll have to figure out a way to pay you back without burying you in cards.
Posted by NPB Card Guy at 8:43 PM

Oh wow those puzzle cards are awesome. I wish Topps did this kind of thing.

Love the 9-card puzzle backs! Kenny has hooked me up with a few 9-pocket pages worth in the past.

"I'll have to figure out a way to pay you back without burying you in cards."

Glad you enjoyed the cards.