Card Of The Week January 12 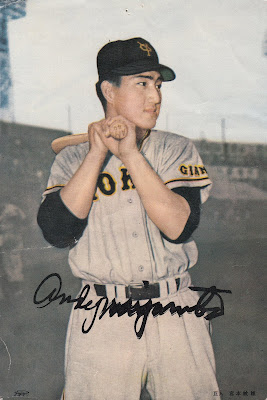 I picked up this card off of Ebay recently.  It's of Toshio "Andy" Miyamoto, a nisei player with the Giants from 1955 to 1962 and the Kokutetsu Swallows from 1963 to 1964.  He was a three time All Star (1956-58), led the Central League in RBIs in 1956 and 1957 and was MVP of the 1961 Nippon Series.  He's one of a number of foreign players from that era that I've been puzzled that BBM has never included in any sets, especially since as far as I know he's still alive and could sign autographs for them.

I didn't know what set this card was from when I bought it but I was struck by the color image on it.  I assumed the card was a bromide and the color images on most bromides are hand colored and don't look as realistic as this image does.

I received the card in the mail the other day and was surprised at how big it was.  It's about 7 1/2 inches tall and about 5 inches in width.  It's also on much thinner paper than most of the other bromides I have.  I started looking through the latest edition of Engel to see if I could it among the bromides but I didn't find any set that it looked like.  I went into the "Vintage Food, Candy And Gum Cards" section and it was there that I found something that looked promising.  There's a set called "JF 25: 1959 Fujiya Color Signature and Printed Name Caramel Premiums" that certainly appeared to be the source of this card, especially when I finally noticed the "Fujiya" logo in the lower left corner of the card front.  The size was right and the description of the cards matched.  One problem though - Miyamoto isn't listed as being in the set.

However Engel lists the set as having "31+" cards - the "+" is an indication that Gary Engel believes that the set has more cards that what he knows about.  So I decided to send a scan of the card to Gary and ask him what he thought.  I got a reply back in about an hour letting me know that I had discovered a previously uncatalogued JF 25 card and he'd be adding it to the Guide.  So since I found something on Ebay to be interesting looking because of the color image there's another card known to the hobby.
Posted by NPB Card Guy at 4:10 PM

Awesome find and glad you were able to checklist it! Interesting on the size....really big!