As usual, I'm late on writing about this, but a couple weeks ago the Mets signed former Hanshin Tiger pitcher Kento Tsujimoto to a minor league deal. Tsujimoto was drafted in the eighth round of the 2005 (fall 2004) draft by the Tigers and was on the ni-gun roster until 2009. Somehow, he managed to pitch less than 30 innings over those five seasons, although he sat out the 2006 season because Hanshin wanted him to build up his body and he missed the 2009 season due to injury. He spent last year playing for the Maui team in the Golden Baseball League. For some reason, the Mets looked at this body of work and felt they had to sign him, although in all fairness, Tsujimoto is only 22 years old. He was only 15 when he was drafted! (According to NPB Tracker, he was the youngest player ever drafted.)

As you might expect from what little of a career he's had, there aren't a lot of baseball cards of Tsujimoto. He appears in the 2005 BBM Rookie Edition set (#63) and his rookie card is #404 in the 2005 BBM 1st Version set, which is his only appearance in any of BBM "regular" sets. He also appears in the BBM Tigers sets in each season from 2005-2009 (ok, I'm assuming for 2008-09 without actually having seen the checklists). He doesn't appear to have had any Calbee cards. So it looks like just the seven BBM cards. (And as far as I can tell, there was no team set for Na Koa Ikaika Maui last season.) 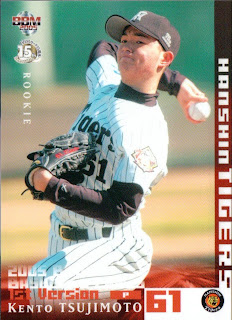 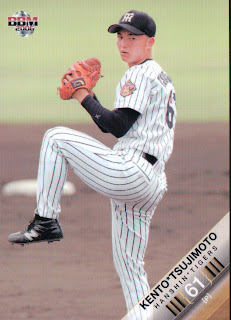