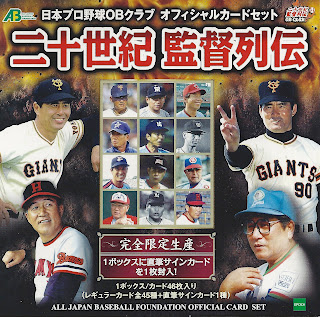 The most recent set put out by the All Japan Baseball Foundation is a box set entitled something along the lines of "Biographies Of 20th Century Managers".  The set contains exactly that - 45 cards featuring various managers, all of whom were active last century and only one of whom (Senichi Hoshino) is active now (although Morimichi Takagi will be active next season).  As seems to be typical with OB sets both from AJBF and BBM, the set is heavy on managers from the 70's and 80's.  The earliest manager is Shigeru Sugishita, who started in 1959.  There's a handful of managers from the 60's - Tetsuharu Kawakami, Futoshi Nakanishi, Yukio Nishimoto, Akitoshi Kodama and Tsuguo Gotoh, but everyone else is later.  The set includes a lot of guys you would expect like Shigeo Nagashima, Sadaharu Oh (with the Giants, not the Hawks), Koji Yamamoto (both of them) and Masaaki Mori, but there were a couple somewhat surprising omissions.  Tatsuro Hirooka, who won a couple Japan Series with the Swallows and Lions, isn't in the set.  Katusya Nomura and Masaichi Kaneda, who almost never appear in OB sets, aren't in this one either.  There are no foreign managers either, so no Wally Yonamine or Don Blasingame.  The set is also missing Kazuhisa Inao, Motoshi Fujita and Akira Ohgi.

I think the biggest omissions though are in the guys whose careers started a lot earlier.  Kazuto Tsuruoka, the winningest manager ever in Japan, isn't in the set.  Sadayoshi Fujimoto, who managed 3200 games in a career that lasted from 1936 until 1968, isn't in the set.  Osamu Mihara and Shigeru Mizuhara, the legendary rivals from Shikoku, aren't in the set.  Tsuruoka, Mihara and Mizuhara won nine of the ten Japan Series between 1951 and 1960 (along with 18 of the 20 league pennants).

The biggest problem that the set has though isn't the player (well, manager) selection.  It's just that it's kind of a boring subject matter.  There isn't really any way to get a really cool action shot of a manager, so most of the cards look like this one of Taira Fujita (#08): 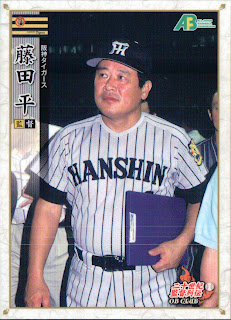 The one exception is the card of Akitoshi Kodama, who was player-manager for the Buffaloes in 1967.  His card (#41) at least shows him playing, rather than managing: 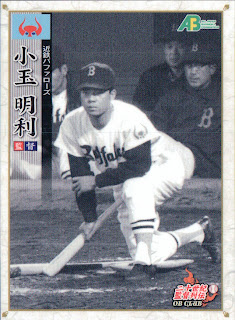 You can see the rest of the cards at Jambalaya's web site.

Almost forgot - I think the set also includes some sort of possible autograph or memorabilia card.  I bought an opened box, so I didn't get one.
Posted by NPB Card Guy at 6:02 PM