This is kind of an odd set for me.  For the longest time, I barely had any cards from the set at all - maybe 30 or so.  Then I scored a near set on Yahoo Japan Auctions via kuboTen and suddenly I had 500+ cards from it.  It remains the only set from the 90's that I never opened a pack for, so I have no wrapper or ad insert for this post.

Similar to the 1997 "Hot Prospect" subset, the "Future Stars" subset featured a top prospect from each of the 12 teams.  Unlike the 1997 version, most if not all the players appearing in this subset had regular cards in the set (and may have had cards in previous sets).  The players in the set were Kenshin Kawakami, Yoshinobu Takahashi, Hajime Miki, Yukiya Yokoyama, Ryuji Yokoyama, Jin Nakatani, Tatsuya Ozeki, Tomoya Kawaguchi, Katsuhiro Maekawa, Satoshi Yano, Hiroshi Shibahara and Kazuya Fukuura.

BBM celebrated the 40th Anniversary of the magazine Shukan Baseball with a nine card subset showing covers of the magazine from over the years.  The earliest cover shown was from 1958 and the latest was from 1996.  The nine cards were also available (somehow) as an uncut sheet.

The Dream Team was a 10 card insert set which featured a "dream" lineup (including DH).  There were two different versions of the cards.  The "normal" cards had a gold/bronze tint to them.  The rarer cards had a silver tint to them.  The silver cards were not distributed in the packs but rather as a mail in contest.


I don't have any cards from the other two insert sets, but luckily, since Ichiro was in both of them, Collecting Ichiro has them.  The Dream Matchups set contains six diecut cards that feature a pitcher and batter on each one.  All twelve teams are represented on the cards.  I'm not positive, but I think each card features a player from each league - this would have been seven years before interleague play started and the matchups at the time could have only happened in exhibition, All Star and Nippon Series games.  The Baseball's Best set contains only two cards - Hideki Matsui and Ichiro Suzuki.  The cards featured raised seams on the baseball background.

The set was the first of BBM's regular sets to feature memorabilia cards (although the first BBM set to feature them was the 1997 Diamond Heroes set).  The set had two jersey cards for the 1997 league MVPs Atsuya Furuta and Fumiya Nishiguchi.

While none of the leader cards were short prints (despite what you might have read elsewhere), there exist larger sized versions of cards #1 and #2 (the two league MVPs).  I don't know if these were some sort of box topper card or (like the silver version of the Dream Team cards) some sort of mail in offer.


UPDATE - Finally opened a couple packs.  Here's the wrapper and the ad insert: 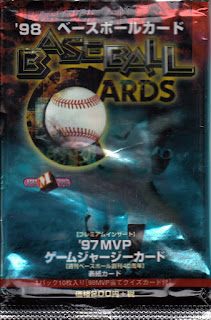 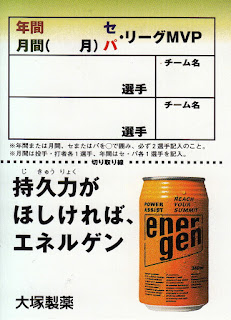