Card Of The Week July 1

I noticed something odd the other day. I recently won a lot of early 1980's Calbee cards on eBay.  It occurred to me while I was sorting out the 80+ cards that I had gotten (mostly from 1983) that it was odd that I hadn't gotten any cards from the Lions or the Orions.  I have other Lions cards from Calbee sets from that time period, so I figured that it was just the way things worked out.  But I didn't have any Calbee cards of anyone from Lotte until 1986.  The chances of that happening just randomly seemed remote - I don't have a huge collection of Calbee cards from the 70's and early 80's but I have more than a few (including a big lot that I won last winter).  How could it be that I had no Lotte Orion cards?

I spent a little bit of time on SportCardForum, checking out the database that Jason has so painstakingly added Japanese cards to.  I looked up a couple guys who were pretty major players for Lotte during this time period.  First, I checked out Michio Arito - some NST, some Takara, but not Calbee until 1985.  Next up was Choji Murata.  I found the same thing - no Calbee until 1985.  Hiromitsu Ochiai?  No Calbee until 1985.  Hmm, maybe Jason only added Calbee starting in 1985...nope.  I do a search for Isao Harimoto and get Calbee cards starting in 1977 - but none in 1980 and 1981 when he played for Lotte.  What about Katsuya Nomura, who spent 1978 with Lotte.  Nope, Calbee in 1977 when he was still with Nankai, Calbee in 1979 when he joined Seibu, but none from 1978.  So it looks like Calbee did not do any cards for anyone from Lotte until 1985.  Weird.

It seems like Calbee is the only card manufacturer to not have included the Orions.  NST, Yamakatsu, Nippon Ham and Takara (once they started doing Pacific League teams in 1981) all included players from Lotte.  Even the TCMA set from 1979 included a couple Lotte players.

I have no idea why Calbee excluded the Orions for 12 years (1973 through 1984).  This would be like Topps not doing any cards for the Phillies from 1952 to 1963.  It could have something to do with Calbee and Lotte being competitors in the snack food market, but then why the change for 1985?

Here's a 1990 Calbee card of Choji Murtata (#24) to show that Calbee eventually did start doing cards for Orions: 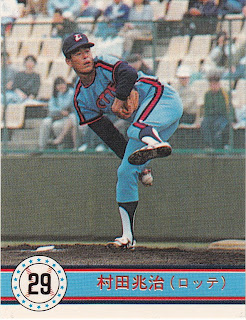 That is interesting, and I I think you might be on to something about the possibility of no license being issued to a competing company. This was probably a time when there was no league-wide licensing arrangement and Calbee likely had to make deals with each team separately. I'd also like to know why Hensley Meulens didn't get a single Calbee card from 1994-96? Bernardo Brito got one and he only played a year and a half!

That said, for a company as large as Lotte, a company that owns teams both Japan and Korea, it's odd that they don't issue cards on a yearly basis. Sure they've done the one-off sets and the Bikkuriman sets, but why not an actual yearly set of cards? If I've learned anything from TakaTanakaGiants YouTube posts, it's that nearly EVERY product in Japan come with some kind of gimmick. So why is Lotte not more aggressive with marketing their baseball properties through merchandising?