In 2004, MLB held their second ever "Japan Opening Series".  The Yankees and (still then) Devil Rays opened the regular season by playing a two game series in Tokyo at the Dome.  Upper Deck produced a commemorative sheet of baseball cards in conjunction with the series: 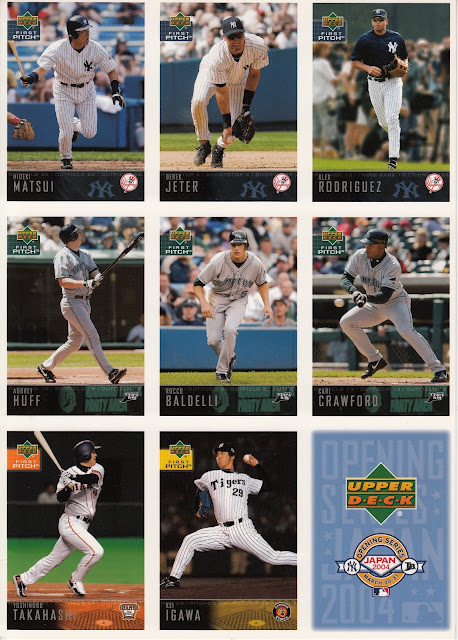 There's a couple interesting things about this sheet.  The first thing is the inclusion of two NPB players - Yoshinobu Takahashi of the Giants and Kei Igawa of the Tigers.  I know the Yankees played each of these teams in exhibition games before the regular season games so I assume that the sheets were given away at these games as well (not sure if Tampa played any exhibition games).  The second thing is that while ostensibly all these cards supposedly are from an Upper Deck set called "First Pitch" (which appears to have been their version of Topps Opening Day and BBM Preview - a smaller set using a similar design to the company's "flagship" set), none of these eight cards actually appear in the set.  Obviously you wouldn't expect the Takahashi and Igawa cards in the set but the actual cards of Matsui, Jeter, Huff and Baldelli cards use different photos and Crawford does not actually have a card in the set.  Alex Rodriguez's card in the First Pitch set depicts him still playing for the Rangers - he had just been traded to the Yankees on February 16th, barely a month and a half before the Opening Series.  I suspect that this is the first baseball card to depict Rodriguez as a member of the Yankees.

The back side of the sheet is taken up by a large shot of Matsui with what looks like a directory of stores in Japan that stocked Upper Deck baseball cards in 2004. 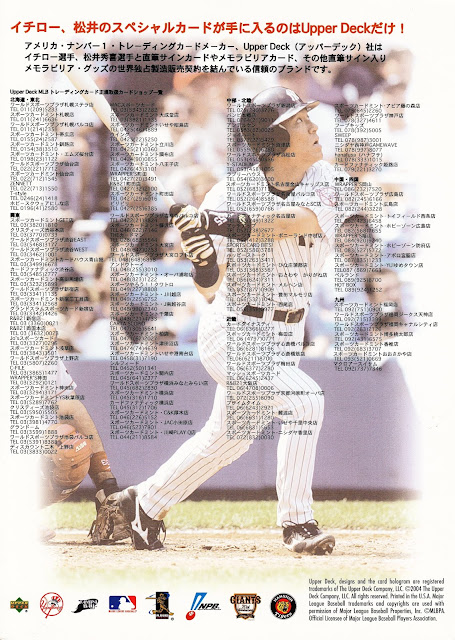 There have been commemorative sheets produced for other MLB Opening Series in Japan but I don't think any of the others are as interesting as this one.  In 2000, Fleer produced a sheet for the Mets-Cubs series but it was a simple promotion sheet for their Tradition set - only two of the eight players included were actually on the Cubs (Sammy Sosa) or the Mets (Mike Piazza).  The other six players were MLB stars from other teams - Ivan Rodriguez, Mo Vaughn, Derek Jeter, Chipper Jones, Pedro Martinez and Cal Ripken.  In 2003 MLB had planned to have the Mariners and Athletics open the season in Japan but called it off due to security concerns with the start of the Second Gulf War.  A commemorative sheet was created by Upper Deck and has somehow found its way to the collectors market.  The sheet shows eight players - four from the Mariners (Ichiro, Edgar Martinez, Bret Boone and Freddy Garcia) and four from the Athletics (Tim Hudson, Eric Chavez, Barry Zito and Miguel Tejada).  All the cards are identical to the corresponding cards in the Upper Deck "MVP" set.  The back of the sheet is similar to the 2004 sheet - a directory of Japanese Upper Deck dealers superimposed over a picture of Ichiro.

MLB has opened the season in Japan on two other occasions - 2008 (Red Sox and Athletics) and 2012 (Mariners and Athletics).  I have not seen any commemorative sheets for those series but I don't know that there aren't any.
Posted by NPB Card Guy at 2:25 PM