Card Of The Week March 13

Last week's edition of the Japan Baseball Weekly podcast featured an interview with former Nippon Ham Fighters player (and current scout) Matt Winters.  Winters spent five seasons with the Fighters from 1990 to 1994 when they still called Tokyo home.  One thing that Winters mentioned that I found interesting is that when he joined the Fighters he was reunited with someone that he had played with in his first season of professional baseball - catcher Fujio Tamura.  The two of them had played together on the 1978 Oneonta Yankees of the New York-Penn League.  Since I'm always interested in discovering NPB players who have played in the minors in the US and I had never heard of anyone playing in the Yankees organization, I had to do a little more research.

Tamura had been drafted by the Fighters in the sixth round of the fall 1977 draft out of high school (Kanto Daiichi) while Winters was drafted by the Yankees in the 1st round of the June 1978 draft (#24 overall with a compensation pick the Yankees got from the Red Sox due to Boston signing Mike Torrez as a free agent).  Tamura was only with Oneonta for 13 games and I suspect he was only a part time player for those games - he only had 17 plate appearances (11 at bats plus six walks) and had no hits.  I'm not sure if the Yankees and Fighters had some sort of working agreement that year - the only two Japanese players on the roster that year were Tamura and infielder Haruhiko Nakano.  Nakano got into 20 games but also had no hits in only 14 plate appearances (9 at bats with four walks and a sacrifice).  Nakano never played for the ichi-gun Fighters (or any other ichi-gun team) - about all I've been able to find out about him (other than his record in Oneonta) is that he was a sixth round draft pick of the Fighters in the fall 1974 draft out of "Shibata Agriculture" high school.  It looks like the Fighters only sent players in 1978 as there are no Japanese players on the 1977 or 1979 rosters (although future Yakult Swallow Rex Hudler was also on the 1978 team).

Tamura didn't debut with the ichi-gun Fighters until 1981 and he became the regular catcher for the Fighters in 1985 and pretty much remained so for the next 10 years.  He made the All Star team nine consecutive years from 1986 to 1994 but was pretty much overshadowed for consideration for the Best 9 and Golden Glove awards by Tsutomo Itoh of the Lions - he only won the awards in 1993.  He was sold to the Marines in 1996 and then signed with the Hawks as a free agent for the 1997 and 1998 seasons.  He's been a coach almost every season since retiring after 1998 - first for the Hawks, then the Fighters, Dragons, Tigers and back to the Hawks where he's been since 2013. 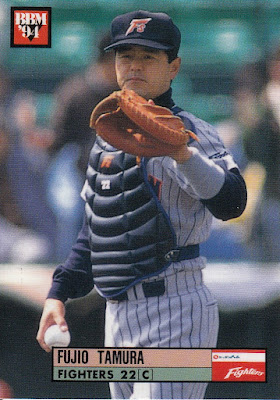 Also I guess I should go listen to JBW because Matt Winters is awesome! (You didn't get to meet him in Arizona, right?)

Well, you should always listen to JBW. And no, I didn't get to meet him in Arizona. That would have been cool.