Card Of The Week March 20

There's a couple World Baseball Classic qualifiers going on this weekend and I was watching last Friday afternoon's game between France and Spain when I heard a familiar name announced.  Former Tohoku Rakuten Golden Eagle Rhiner Cruz pitched a "perfect" inning (one out in the eighth and two outs in the ninth) for Spain.  It was in a lost cause - Spain lost the game 5-3 and was eliminated.  I did a little research on Cruz and discovered that this was not the first time he had pitched for Spain - he had previously appeared with them in the 2007 European Championship and Baseball World Cup, the 2008 Olympic Qualification Tournament, the 2009 Baseball World Cup and the 2013 WBC.

Cruz spent around a season and a half with the Eagles, working mostly in middle relief.  Baseball card-wise he kind of fell through the cracks - I only know of four Japanese cards of his - 2014 Owners League, 2015 Eagles team-issued set and 2015 BBM Eagles set plus a "bonus" 2014 BBM 2nd Version set included with Sports Card Magazine #106.  So he never appeared in a BBM "flagship" set (the SCM card really doesn't count) or Calbee set. 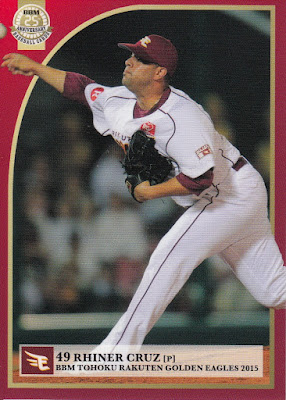 References: Jason's contributions to the Inventory Manager at SportsCardForum and the biography of Cruz at Baseball Reference's Bullpen Wiki.
Posted by NPB Card Guy at 5:20 PM