The Hawks crushed the Buffaloes last Tuesday by a score of 22-6.  The sole bright spot for Orix was Tony Blanco, who went three for four with two home runs and five RBIs:

(H/T YakyuDB for the video)

These were his second and third home runs for the year with the ichi-gun team after being called up from the farm team on May 10th.

I mentioned a few weeks ago in my write up for this year's 1st Version set from BBM that Blanco was not in it.  That's not strictly true.  While Blanco does not have a regular player card, he is on the Orix Buffaloes team card (#329): 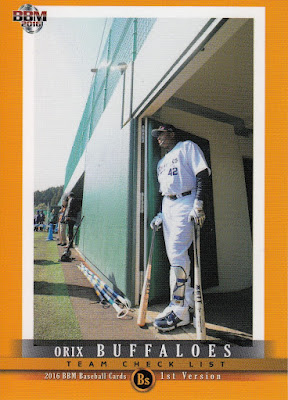 I believe that the boot on his left leg is probably the reason he started the year with the farm team.
Posted by NPB Card Guy at 10:53 PM