A couple months back I did a post on Lions pitcher Fumiya Nishiguchi on the occasion of his retirement.  I mentioned that I had learned while researching the post that the Lions had sent Nishiguchi to the Sioux City Explorers of the Northern League for six games during 1995 season to learn how to throw a change-up.  I figured that with having only spent six games with the team, he wouldn't have made the card set that was produced for the team by Collect-A-Sport that season but I couldn't find an on-line checklist to confirm or deny it.

It occurred to me a couple weeks after I published the post that I should ask Bill Tyler, the web's foremost authority on the resurrected Northern League (1993-2011) and the independent American Association (2006-present), about the team set.  He confirmed that Nishiguchi actually WAS in the set.  Now all I needed to do was to find a copy of the set.  I lucked into one for a reasonably cheap price on Ebay the other day and it showed up in the mail today.

Here's the front and back of Nishiguchi's card: 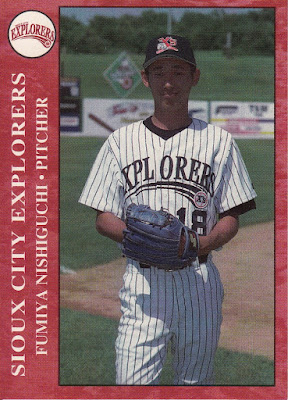 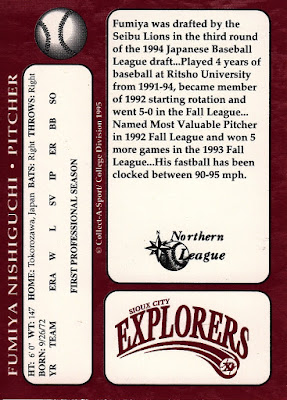 The bio is actually pretty accurate - although it was Rissho University, not Ritsho and if you didn't know that collegiate baseball in Japan has a Spring and Fall season, you wouldn't understand what the "Fall League" was.

Nishiguchi was one of three players that the Lions sent to the Explorers that summer.  Pitcher Hisaki Tomioka and third baseman Jun Yamada also played for the team.  Yamada made the team set but Tomioka - despite appearing in twice as many games as Nishiguchi - did not.  Here's Yamada's card: 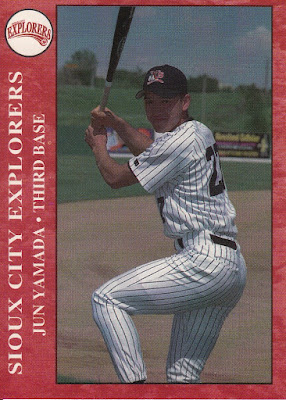