Busy weekend so I'm a day late on this...

Jonny Gomes asked for and received his release last week from the Eagles.  He apparently had a family matter to deal with and hopefully everything will work out well for him.  His exit, however, brings to mind other foreign players who had a quick exits from Japan - Mike Greenwell (7 games with Hanshin in 1997), Frank Howard (1 game with the Lions in 1974 before getting injured), Brian Bannister (left before the 2011 season following the Tohoku Earthquake), etc.

For some reason though (and it's probably unfair to Gomes), I keep thinking about Brad Penny, who the Hawks signed for the 2012 season.  He made one start for them, going 3 1/3 innings against the Eagles and giving up 7 hits and 6 runs (4 earned) while walking three and only striking out one.  He complained of shoulder pain although MRIs in both Japan and the US were negative.  The Hawks released him in late April that year.

Gomes did not appear in this year's 1st Version set and apparently is not in BBM's Eagles team set either.  His only card is in the team-issued Eagles set.  Penny similarly did not make the 1st Version set in 2012 but he did show up twice in the BBM Hawks team set.  He had a regular player card plus a card in the 1968 Topps "Game" card-esque "Newcomers" subset (#H90): 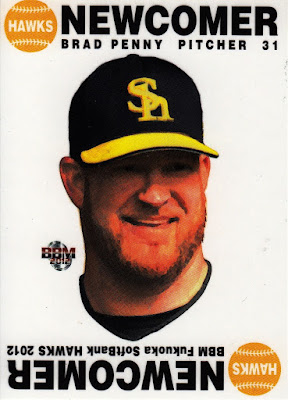 I honestly didn't even know Brad Penny went over to Japan at all - I guess that shows just how brief his tenure was!