Giants pitcher Tetsuya Yamaguchi retired at the end of the 2018 season.  Yamaguchi had an interesting route to NPB stardom - he had an opportunity to go to Kokushikan University after graduating high school but ended up signing with the Arizona Diamondbacks instead.  He spent three years (2002-04) playing for the Missoula Osprey, Arizona's Pioneer League entry.  He returned to Japan in 2005 and worked out with the Baystars, Eagles and Giants who ended up taking him as their first (and only) pick in the ikusei portion of the 2005 draft.  He was moved onto the 70-man roster in early 2007 and made his ichi-gun debut in April of that season although he only got into 32 games with the ichi-gun team that season so he his rookie status had not expired.  He was the first Giants ikusei player to make it to the top team.  He really came into his own in 2008, going 11-2 in middle relief and being named Rookie Of The Year - the first time a former ikusei player won that award (the second was Tetsuya Matsumoto of the Giants who won it the following year).   Yamaguchi was a mainstay of the Giants' bullpen over a nine year stretch from 2008 to 2016, appearing in at least 60 games each year.  His numbers declined in 2016 however, with his ERA soaring to 4.88 after having never been more than 3.05 before.  He was limited to only 18 games with the ichi-gun Giants in 2016 and spent all of 2017 with their farm team.

Because BBM didn't start including the ikusei drafted players in the Rookie Edition sets until 2009 Yamaguchi does not appear in the 2006 Rookie Edition set.  His first BBM card was #727 from the "1st Version Update" subset of the 2007 BBM 2nd Version set (which BBM somewhat inexplicably labelled as being "1st Version") and his first Calbee card was #63 from the 2009 set.  His first ever baseball cards however were actually from the Missoula Osprey team sets.  He had cards in each of their sets from 2002 to 2004.  I don't have any of these cards but I swiped the images of the 2003 and 2004 cards from TradingCardDB.com: 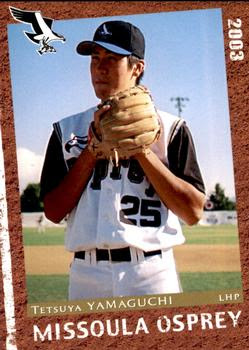 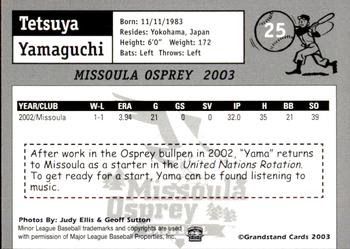 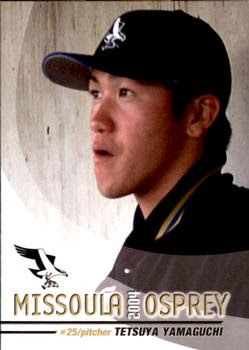 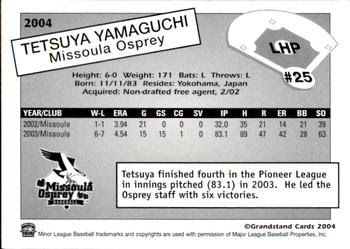 Here's a bunch of his Japanese cards: