Card Of The Week November 11

I really try not to feature the same players over and over as Card Of The Week but sometimes the circumstances seem unavoidable.  I highlighted Yuki Yanagita being named MVP of the Pacific League Climax Series three weeks ago and included him with the other award winners for the Nippon Series last week.  So I didn't intend to do him again this week but then Friday happened.  It was the opening game of the MLB "All Stars" vs Samurai Japan series and the MLB team was up 6 to 4 going into the bottom of the ninth.  Japan had pushed across a run on a couple singles and a stolen base but both Tetsuto Yamada and Shogo Akiyama had struck out so there were two outs with one on when Yanagita came to the plate against Padres reliever Kirby Yates and did this:


This came a week and a day after his walk off home run won Game Five of the Nippon Series.  He added an additional home run in yesterday's game as well - a two run shot off of Erasmo Ramirez of the Mariners.  He went 4-4 yesterday, scoring two runs and knocking in four.  I think this is the first time he's ever played for Samurai Japan - he was recovering from injuries and had to miss both the Premier 12 in 2015 and the World Baseball Classic in 2017.  I'm not sure if he's ever suited up for one of the "friendly" matches Japan has played over the past few years but I do know he hasn't made it into either of Calbee's Samurai Japan sets from the last few years (a set that sadly does not look like it will have a 2018 edition). 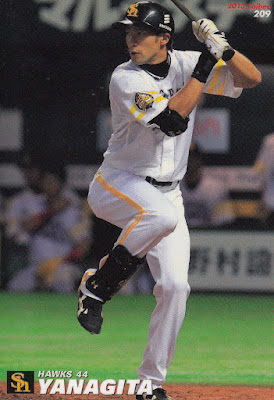 I have not watched MLB's coverage of these games - for some reason MLB decided that they were only going to broadcast the game on the MLB Network and not on-line at MLB.tv.  Since we cut the cord a couple years ago I don't get the MLB Network so I'm out of luck.  I've been finding other streams on the internet so I've been watching the Japanese broadcasts.  So I don't know how atrocious the broadcast team has been.  I did notice one thing just now about the box scores on MLB's web page however.  There's a link to a player named "Kazuk Tanaka" who is listed as being born on October 28, 1981.  I don't know who this is.  I assume that they really mean Kazuki Tanaka from the Eagles but he was both on August 8, 1994.  What's odd is that there's a Kazunori Tanaka who played for the Baystars in the 00's who's birthday is October 28, 1981.  So MLB apparently decided that Samurai Japan had a 37 year old guy on their roster who'd been retired for 10 years.

H/T for the video to this post on NPB Reddit.
Posted by NPB Card Guy at 6:46 PM