Card Of The Week October 21

The Hawks beat Seibu 6-5 today, which concluded their defeat of the first place Lions in the Final Stage of the Pacific League Climax Series.  The Hawks will now move on to face the Hiroshima Toyo Carp in the Nippon Series - the Carp having swept the Giants in the Central League Climax Series last week.  This will be the fifth appearance of the Hawks in the Series in the last eight years - they have won their previous four appearances.  Here's a fun fact - they've faced five different Central League clubs in those five Nippon Series appearances.  The only Central League team they haven't faced during this period is the Giants.

Yuki Yanagita was named MVP of the Climax Series after hitting .450 with 2 home runs and 8 RBIs.  Here's his card from last year's Fusion set from BBM (#045): 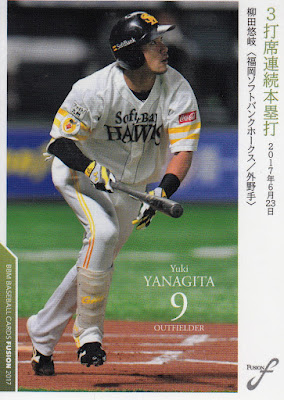 That is a neat fact, I hadn't realized they had faced everyone in the CL except the Giants. One of those odd things that become possible with 2 leagues of 6 teams each I guess!