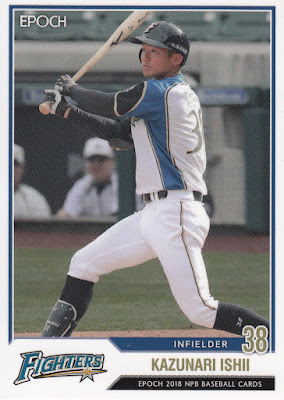 Justin (Charm City Autographs) has a YouTube channel and recently posted a video showing him opening several packs of 2018 Epoch NPB cards.  One of the cards he pulled was the above card of Kazunari Ishii of the Fighters (#168).  Justin immediately noticed something interesting about this card - the photo was taken in Arizona last February.  He realized that the guys in the background were from the KT Wiz of the KBO - the picture was taken at Salt River Fields At Talking Stick in Scottsdale at the exhibition game that the Fighters played back on February 10th.  A game, by the way, that I attended (along with Deanna and Dani).

I've written in the past about the photos BBM has used that were taken in Arizona in the last three 1st Version sets (2016, 2017 and 2018) but I have to confess that it hadn't occurred to me that Epoch might have also used photos from Arizona this year.  But once I knew there was one I had to go and check the rest of the cards to see if there were any others.

One thing stood out to me as I looked through the Fighters cards in the set - almost every player was shown wearing their home uniform.  There was only one player shown wearing the black jersey that the Fighters wore during training camp and that player (Eito Tanaka) was not one of the players who the team took to Arizona.  All the rest of the photos appeared to have been taken in games.  I knew that the Fighters had played three games in Arizona in February - the afore-mentioned game against KT, an inter-squad game on the 12th and a game against the LG Twins on the 13th.  I scanned through the Fighters cards then looking for photos that appeared to be taken during the day and (obviously) were of players that went to Arizona.

I identified 12 more cards (out of the 36 total cards for the team) that I suspected of featuring Arizona photos.  Four I was quickly able to confirm were photos from Scottsdale:

Of the remaining eight cards there are five that I'm almost positive are from Arizona based on the backgrounds in the photos:

The photos on the other three cards were probably taken in Arizona but lack any definitive in their backgrounds:

I took another look at the Series One and Series Two cards from Calbee this year just in case there were cards from Arizona in those sets as well.  The regular player cards appear to all have photos taken in Japan but I think the photo on the "Dora-Ichi" subset card for Kotaro Kiyomiya from Series One was probably taken Scottsdale.
Posted by NPB Card Guy at 12:31 PM