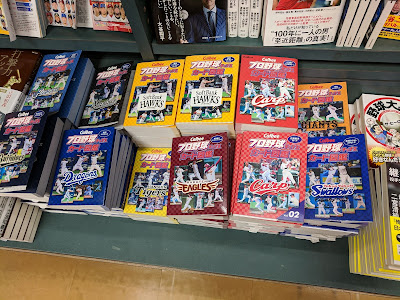 About a year ago I was browsing Amazon's Japanese website and I came across an interesting little book.  It was a small paperback book that looked like it had something to do with Calbee cards featuring Hiroshima Toyo Carp players.  It was around 1200 yen (~$10.50) so I decided to pick it up.

When I arrived I discovered that the book did indeed show Calbee cards of Carp players.  The cards are broken down by player and the players are broken down by position.  The book has 400 pages and I would guess that there's close to 500 cards shown in the book for roughly 100 players.  The player selection is heavy on the recent players although there's a handful of older players - Koji Yamamoto, Sachio Kinugasa, Manabu Kittabeppu and Yutaka Ohno for example.  Some players only have one card while others have many - Kenta Maeda has 29 while Tomonori Maeda has 42(!).

It was an interesting enough book that I was curious if there were books for any other teams.  I searched Amazon Japan a number of times over the past year but I didn't find any.  But a couple weeks ago Deanna Rubin sent me the above photo that she had taken at the bookstore near the Tokyo Dome (I think the store is called "Oaks" and is the store that replaced the store that had been there for 60+ years until it closed a few years back - Yamashita) and asked me if I had seen these.  Obviously I had not seen the other teams.  I did another search on Amazon Japan and lo and behold, books for all twelve teams showed up.  I wondered why I hadn't seen them before but a glance at the publication dates explained that - the Carp book had been published in July of 2017 but the rest weren't published until after August of this year - in fact the Lions book was just published two days ago.  I ordered books for the Dragons, Hawks and Fighters and had them in hand a few days later (Amazon Japan and DHL continue to amaze me - I ordered the books on a Tuesday and had them by Friday). 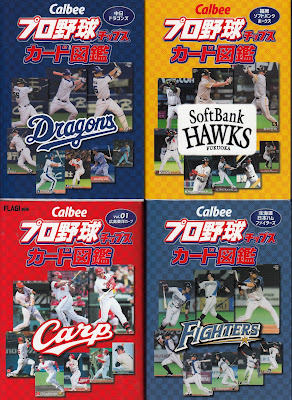 Here's a couple example pages to give you a sense of what the books look like.  These aren't great scans because the books are too thick to lie flat in my scanner but you'll get the idea.  These are the first couple pages of Shohei Ohtani's section in the Fighters book: 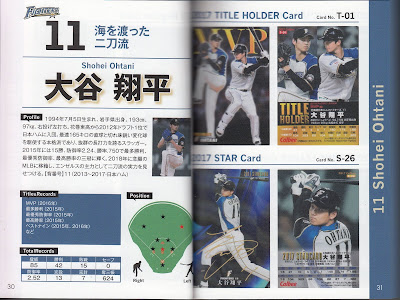 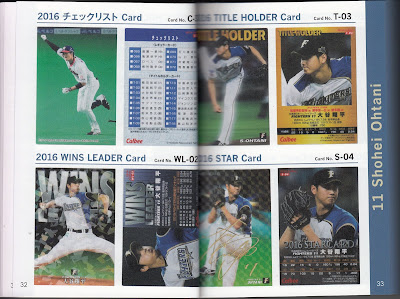 Ohtani has 12 pages total that show 22 cards.  Now you may be surprised to discover that Ohtani HAD 22 Calbee cards in the five years he was in Japan - I know I was.  These 22 cards include checklist cards (although not all of them that feature him - there's this one from 2014 Series One showing both him and Sho Nakata that's not included), cards from Title Holder, Exciting Scene and Exciting Rookie  subsets, cards from a couple of the "Wins Leader" Lucky Card redemption box sets and Star insert cards, including the parallel versions.  This last item is one of my complaints about these books - there are two many instances where they include both the original and the parallel version of the premium insert cards.  It's annoying enough to see two nearly identical versions of a recent "Star" insert card - one with a facsimile signature and one without - but it's really irritating for some of the older inserts where the parallel version was just a "foil" finish that doesn't come across well in a picture.  Here's Shinya Okamoto's pages from the Dragons book as an example of this: 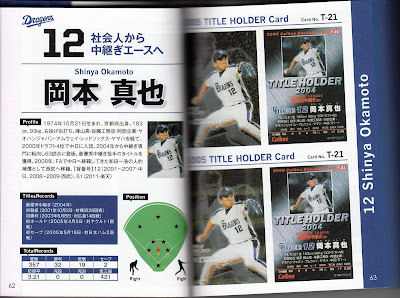 I have other complaints about the books.  As I mentioned with the Carp book, the players included in the books are mostly recent players.  The books do include some older players but in almost every case the older players only have one or two cards shown.  For example here's Hall Of Famer Koji Yamamoto's pages from the Carp book: 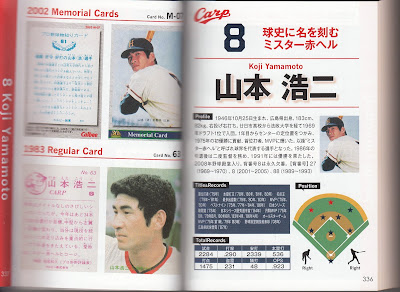 (You'll notice that Yamamoto's bio page is on the right while those for Okamoto and Ohtani are on the left.  The Carp book opens on the left while the other books open on the right in Western style.)  You can see there's only two cards for Yamamoto.  What's also annoying is instead of showing a card of him from the 1970's, they show a card from the 2002 "Memorial" subset that celebrated Calbee's 30th Anniversary.  This is another complaint I have - the advertising for the books brags about how Calbee's been publishing cards since 1973 but I haven't seen a card from earlier than 1981 in any of the books.  The only card for Kinugasa is from 1984.  Senichi Hoshino's cards are from 1982 and 2012 (another "Memorial" subset card - this time for Calbee's 40th Anniversary).  Morimichi Takagi only has one card and it's also a card from the 2012 "Memorial" subset.  Then there's the guys who don't show up at all - Hiromitsu Ochiai is not in the Dragons book while neither Katsuya Nomura or Hiromitsu Kadota show up in the Hawks book (the Hawks book does include other Nankai-era players so it's not that non-Softbank players are being excluded).

I was considering getting books for all 12 teams but I'm not sure I'm going to do that now.  The emphasis on recent cards is a bit of a turn off for me as I have all the Calbee sets since 2012.  I'll probably just pick up the Lions book.  But your mileage may vary.  Here's a link to the listing of all the books on Amazon Japan - there's actually 13 in all since there are two versions of the Carp book - I don't know what the difference is between the two versions.  (I thought it'd be cool if they did an edition for the Kintetsu Buffaloes but that doesn't look like that's happened.  I don't know if the Orix edition includes Kintetsu players but I would expect that it doesn't.)

I have seen someone selling these on Ebay for around $26 with free shipping - if you are getting just one it's probably six of one, half dozen of the other about whether that's cheaper than Amazon.  If you're getting more than one though, Amazon is the way to go.  I got the three books for roughly $45 including the super fast DHL shipping.
Posted by NPB Card Guy at 11:32 AM

I like the concept of books, but I don't know that they would be well received for MLB here in the States. 22 cards in five years for Ohtani is shockingly low in my opinion, but that's the difference between Calbee and Topps I suppose. He'll be represented in at least 22 different sets by Topps this year and that's not counting the Parallels.

Neat idea, but Calbee, but I don't think I'll be ordering a Buffaloes book for a couple pages of Tuffy Rhodes card pictures. I'm still annoyed that neither Hensley Meulens, nor Bernardo Brito ever received any cards from Calbee.

@P-town Tom - I have 70-ish BBM cards of Ohtani between 2013 and 2017 and that's probably about half of what they issued so it's also the difference between BBM and Calbee. It's just that Calbee doesn't issue that many sets.

@Jason - Well especially since you already own the Tuffy Rhodes cards

This strikes me as another one of those "Japanese companies still using fax machines in 2018" anachronisms one so often finds here.

I remember Topps did something similar in the late 1980s, issuing team based books which featured pictures of all the Topps cards issued for that team (I think they went up to the 1988 set or so). I had one (the Expos) and it was kind of useful since I didn't have all the Expos cards and it was a useful quick reference guide to all the cards for that team if you were a collector. Also it was useful since in the pre-internet days you didn't have all of that information readily available on your phone 24 hours a day.


I just can't understand the purpose of a series of books like that in 2018, it seems like they really have the worst of both worlds with these. I mean, you can easily just look up on the internet all of those cards to see what they look like so its kind of useless from that point. Also, unlike the Topps books from the 80s, if I understand correctly these don't even have value as comprehensive team checklists for team collectors since they don't offer that either, it sounds like just a random assortment of prominent player cards, tilted towards recent ones (which there are already gobs of information about on the internet anyway). So they have no functional value from that perspective either....

Very cool. Probably wouldn't pay a premium for these. However if I stumbled across some of these at the flea market for a few bucks, I'd probably grab them. i'd put them right next to my 1988 Oakland A's Surf book.

@Sean - I think you've really nailed it with your comment. These books fail as checklists for the recent cards because they're not comprehensive. Even as player checklists they're not comprehensive because (for example) there are a couple Calbee Ohtani cards that aren't included (and not just the Samurai Japan ones). I'm sure if I looked at other players I'd see the same thing. They also fail as a source to see what the rarer Calbee cards from the 1970's look like since they didn't bother showing any.

I had really wanted to like these books but I'm disappointed with them. I was hoping for something as useful as the 1973 Calbee book but they fall far short of that.

Yeah, I can only conclude that these were lazily put together just as a quick money maker with zero consideration to their usefulness to collectors. I really can't stand products like that.