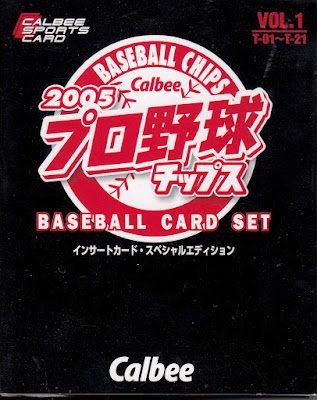 I picked up an odd little set off of Ebay a couple weeks ago.  It's a box set containing the "Title Holder" cards from the 2005 Calbee Series One set.  I'm not completely sure on this but I'm assuming that this was a set available as a mail-in redemption when receiving a "Lucky" card in a pack.

There were 21 "Title Holder" cards in the set.  As usual, they celebrate the players who either lead the league in a statistical category in 2004 or won one of the major awards (MVP, Rookie Of The Year, Sawamura).  Unlike the BBM "Leader" cards there was only one card for each player, even if the player won more than one award or lead in more than one category. 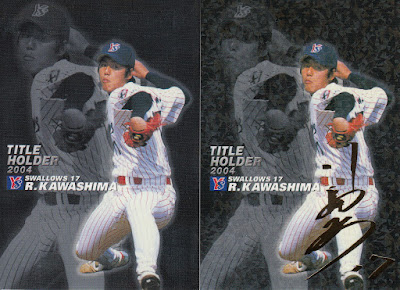 The backs of the cards were identical: 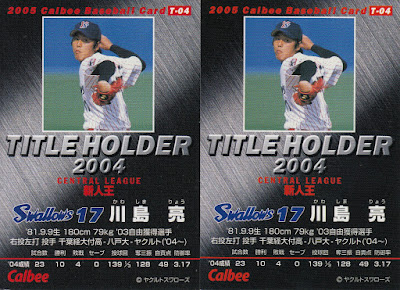 I grabbed an image from the Calbee Collector's website to show the other version as well.  This photo shows the normal version a lot better than my scan above does: 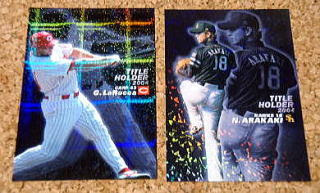 As you might expect, there's a pretty good selection of players in the set.  There are eight guys who would go on to play in MLB - Ryota Igarashi, Kei Igawa, Hisashi Iwakuma, Kenshin Kawakami, Munenori Kawasaki, Daisuke Matsuzaka, Yoshinori Tateyama and Koji Uehara plus a bunch of big names like Nobuhiko Matsunaka, Tomoaki Kanemoto and Tuffy Rhodes.

The cards themselves look much better than they do in the scans.
Posted by NPB Card Guy at 10:46 AM