I'm getting around to this kind of late but it looks like BBM has decided to stop publishing Sports Card Magazine.  Issue #121 which came out at the end of January was apparently the last issue.

A reader (LEWIS JOHN) had commented back at the end of March that #121 had contained a notice that it was the last issue.  I hadn't noticed the notice but since I don't read Japanese it was easy for me to miss.  I went looking through the issue and I found something that looked like it could be it on page 32: 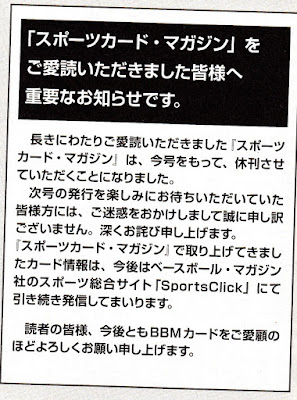 I ended up contacting Deanna Rubin and asking her for the gist of what the text said (and to confirm that it really was something about the end of the magazine).  She said that it said "basically they are thanking all the people who were awaiting the next issue and apologizing for the trouble it will cause, but apparently they will be continuing online on Sportsclick".

This is a disappointing development to say the least.  Sportsclick is BBM's website (which still shows SCM #121) and while it will contain information for BBM's upcoming card releases, it does not have checklists for the sets or the JSCA price guide.  Or promo baseball cards for that matter.  I'm kind of hoping that BBM does continue publishing the magazine or something similar according to a different schedule (something other than bi-weeklymonthly).

I had also asked Ryan about the fate of SCM and he had confirmed at a card store (Mint Kanda I think) that they were finished publishing the magazine.

So that's it in a nutshell - no more Sports Card Magazine, at least for now.  Thanks to Deanna, Ryan and LEWIS JOHN for all the information they provided.
Posted by NPB Card Guy at 9:10 PM

It is a sad day indeed.