Takahiro Norimoto of the Eagles struck out 10 Buffaloes last Thursday en route to a 4-1 victory.  It was his sixth consecutive start in which he recorded at least 10 strikeouts - that ties him for the record for most consecutive starts with more than 10 strikeouts.  The other record holder is Hideo Nomo, who did it in 1991.  Norimoto will likely get his shot at breaking the record on Thursday against the Yomiuri Giants.  Here's his 2013 2nd Version card (#608): 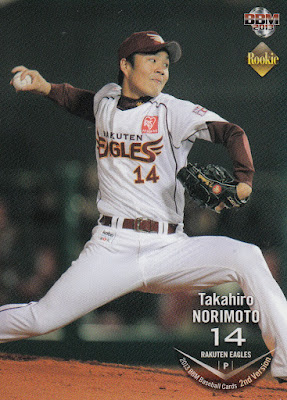