I got a comment this morning on my post about the 2017 Bowman WBC cards from a reader named "Drec" who said that his son had pulled "the Shohei Ohtani purple mega refractor" from a pack of Bowman cards.  My first thought was that he must have been mistaken and meant Sugano or Yamada.  But I started doing a little research and some Ebay searches and discovered that yes, there is a 2017 Bowman card for Shohei Ohtani (or "Shohei Otani" as he appears on the cards).  Here's a somewhat blurry scan of the front and back of the card that I swiped off of Ebay: 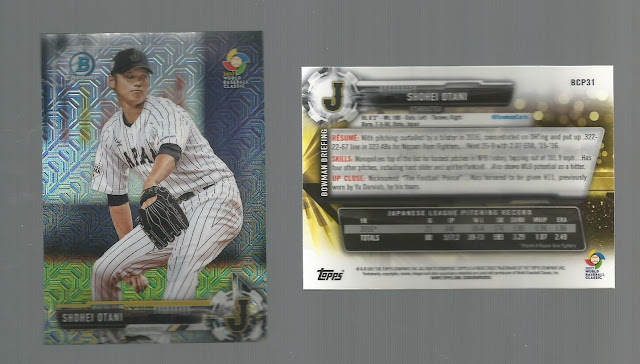 The card does not appear in Topps' on-line checklist for the Bowman set.  It apparently is only available in the Bowman Mega Packs which features cards from a checklist roughly the same as the Bowman Chrome Prospects checklist except that card #31 (Chance Adams) has been replaced with Ohtani.  From what I see on Ebay there's a number of different parallels of the card available as well.

It rankles me a bit that there's a WBC card of Ohtani since he didn't actually play in the WBC but I'm probably in the minority on that issue.

So thank you Drec for making me aware of this card and my apologies for doubting you at first!
Posted by NPB Card Guy at 7:52 PM

Ohtani is a great talent. I hope he comes back a full health this year and really puts on a two-way show!

I was pretty bummed when they announced he'd miss the WBC... but I'm okay that Topps included him on the checklist. In fact, I'd love to one day add it to my binder.

WOW!!! I didn't know there was an Ohtani card...I wonder how limited they are. Granted people are paying a good amount for the one card.

You're welcome Card Guy! The card has become a prized piece in my sons collection! It's crazy that I almost put the card in the poop stack!! Any thoughts on whether I should grade and unload while the demand is high or should I wait for him to hit the states?? I had read multiple reports that Topps ran into a legal issue with his card thus stopped distributing and actually pulled Mega boxes back...is this true? If so, it's a keeper for sure.

Thanks! Drec (supposed to have been Drew but typo on my end!)

I haven't heard anything about Topps having to pull them although that might explain why their price has skyrocketed on Ebay.

Sorry but I don't have any suggestions about what you should do with the card.