For the second time this season the Tokyo Yakult Swallows today won a game on a walk off grand slam.  The first time was back on April 2nd when Atsushi Ugumori beat the Baystars in the bottom of the tenth.  This time it was Takahiro Araki beating the Dragons in the bottom of the ninth.  Here's a highlight video of the game - Araki's at bat starts at about the 0:50 mark:

Araki was the third round pick of the Swallows in the 2009 draft out of Kinki University.  He debuted with the ichi-gun team in 2010 but has spent much of his career with the farm team.  Here's a card of him from the "Recommended Hope" subset from the 2011 BBM 1st Version set (#404): 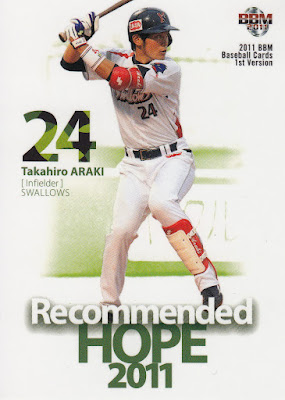