The Kintetsu Buffaloes were not one of the more successful NPB franchises over their 55 season lifespan (from 1950 to 2004).  They didn't finish higher than fourth until their 20th season (1969) and had finished last 14 times before that.  But they had a stretch in the mid to late 1970's where they were quite good for a few years.  They won the Pacific League pennant for the first time ever in 1979 and met the Hiroshima Toyo Carp in the Nippon Series.

The two teams split the first six games of the Series with the home team winning every game (the Buffaloes were playing their home games in the Series in Osaka Stadium because they were embroiled in a legal spat with their neighbors about adding lights to Fujidera Stadium, their home ballpark, that wouldn't get resolved until 1984).  In Game Seven, the Carp carried a 4 to 3 lead into the bottom of the ninth (the first bottom of the ninth to be played in the Series) with their ace reliever Yutaka Enatsu on the mound.  But things got difficult quickly.

Koichi Hada lead off the inning with a single up the middle.  Hada was replaced by pinch runner Shiro Fujise.  During the next batter Chris Arnold's at bat Fujise broke for second.  The throw from Carp catcher Shiro Mizunuma was short and bounced past shortstop Yoshihiko Takahashi into center field.  Fujise went to third on the error.  Enatsu then walked Arnold and Buffaloes manager Yukio Nishimoto replaced him with pinch runner Tokuichi Fukiishi who promptly stole second without a throw during the next at bat (for Mitsuyasu Hirano).  Hirano (who had homered earlier in the game) was then issued an intentional walk, loading the bases with nobody out.

The pitcher's spot in the lineup was due up next and Nishimoto sent pinch hitter Kyosuke Sasaki up to bat for pitcher Tetsuju Yamaguchi.  Sasaki hit a shot down the third baseline that was just foul as it crossed the base - a fair ball would probably have won the Series for the Buffaloes.  Instead Sasaki ended up striking out.  So now it was one out with the bases still loaded.

Next up was leadoff hitter Shigeru Ishiwata.  The Buffaloes attempt a suicide squeeze but Carp manager Takeshi Koba had anticipated this and called for a pitchout.  Enatsu's pitch comes in high and outside and Ishiwata misses it.  Fujise is hung up between third and home and Mizunuma runs him down and tags him out for the second out.  Ishiwata then strikes out and the Carp win Series, their first ever championship.

You can watch all of this in the following video - the fateful ninth inning starts at the 1:53 mark:

The Buffaloes would ultimately never win a Nippon Series.  They would lose again to the Carp in seven games in 1980, lose in seven to the Giants in 1989 (after being up 3-0) and lose in five to the Swallows in 2001.  1979 was the seventh time that Nishimoto had managed a team into the Series without winning it - his eighth and final time would be in 1980.

Calbee issued a 23 card series in late 1979 celebrating that Nippon Series.  The fateful suicide squeeze attempt was immortalized on one of the cards: 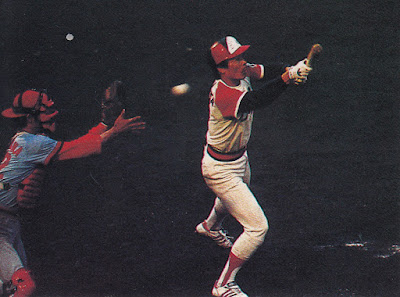 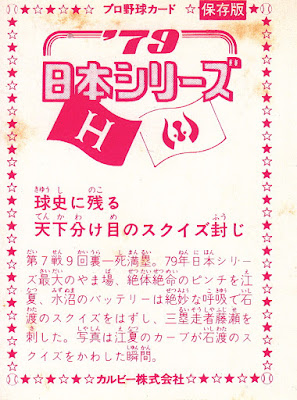 Here's another picture showing the play from the book "Nostalgic Stadiums Of Kansai": 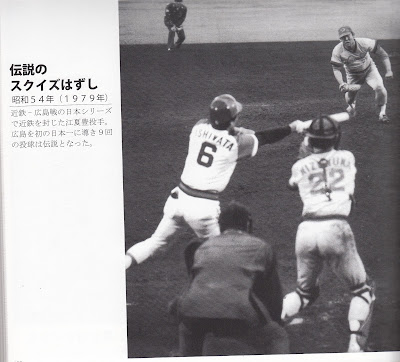