Size: 372 cards numbered 1-336, CS01-CS36
Cards Per Team:  28 (team card, manager + 26 players)
Team Card Theme:  Spring Training
Number Of Leader Cards:  N/A
Checklists:  None
Subsets:  Cross Squall (36)
Inserts:  Rookie Reprint (12), HyperNOVA (12), 3D Cross Squall (12) (#'d to 25)
Memorabilia Cards: Jersey cards for Shohei Ohtani and Seiya Suzuki (as well as a combination card with both of them).  Each individual jersey card is serially numbered to 200 plus a parallel patch version numbered to 20.  Not sure of the counts on the dual card.  There are a large number of autograph cards available as well - including ones with multiple autographs
Parallels:  12 regular player cards have a "secret" alternate photo version.  108 regular players cards have facsimile autograph parallels - silver, gold (#'d to 100), holograph (#'d to 50), red (#'d to 25) and green (#'d to 10) - this includes the "secret" versions of the cards as well.  Many (possibly all) of the rookie cards have two numbered parallel versions - one is numbered to 150 and the other (the "holo foil" version) is numbered to 50.  The "Cross Squall" cards have at least one parallel version that's numbered to 100 - I think there's also a "1 of 1" version as well.  The HyperNOVA insert cards also have a parallel that is numbered to 100.
Notable Rookies: Takuya Katoh, Sosuke Genda

For the third year in a row the details of BBM's annual 1st Version set have pretty much remained the same - 372 cards split into 324 player cards (including all 12 managers), 12 team cards and 36 cards from the cross set subset ("Cross Plasma" in 2015, "Cross Freeze" last year and "Cross Squall" this year) and the usual plethora of parallels.  My complaints about the set has pretty much remained the same as well - I miss the "Leader" subset that was standard from 1991 to 2013 (although BBM did add one in last year's Fusion set that at least covered the statistical leaders although not the award winners) and I wish the set was larger - at 27 player cards per team that has to include the manager and all the non-ikusei rookies there are somewhat significant players who don't have cards in the set (although like last year I don't have a good example of any).

There is one big new thing that BBM did this year that I actually like quite a bit.  They issued an "secret" version of 12 of the player cards (one per team) that features a different photo than the regular card.  I'm not sure how rare these are - from what I can see on Yahoo! Japan Auctions they don't appear to be getting a premium price.  The cards include several of the biggest stars in Japan - Shohei Ohtani, Tetsuto Yamada, Yoshitomo Tsutsugoh and Hayato Sakamoto.  I unfortunately don't have any of these yet - I was unable to get a complete set that include these and will have to get them one at a time.  Here's the regular and "secret" versions of Takahiro Arai's card (#177) - the one on the right is the "secret" version (I swiped the image from Yahoo! Japan Auctions): 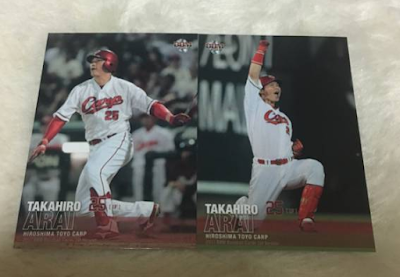 The other thing I like about this set is the design.  It's a very clean design with full bleed photos.  The only thing about it is it seems very similar to last year's Topps Stadium Club design:

And both sets I think owe something to the 1997 Fleer set:

As is standard for this set the bulk of the photos used on the cards are from last year.  The only exceptions for this are for new players on teams (rookies, players who switched teams in the off season and new imports) and the Chunichi Dragons, who have new uniforms this year (and maybe some of the Orix Buffaloes?).  The photos for the exceptions were taken in early training camp.

The card backs are pretty much the standard BBM card back:

The sole subset in the set is the annual "cross set subset".  This year it's called "Cross Squall" and like all the other "Cross" cards it features the image of the player superimposed over some background (this year it has a rainbow) on the front and has the original image of the player on the back.  The cards are numbered separately from the rest of the set - CS01 to  CS36.  I'm assuming that the 2nd Version set will have 36 more of these cards.


Like the Calbee Series One set, this is a typical BBM 1st Version set so if you've liked other ones, you'll probably like this one too.

All the regular cards along with inserts and more common parallels (plus some of the rare ones) can be seen over at Jambalaya.
Posted by NPB Card Guy at 8:34 PM

Nice rundown. I opened a pack on the "A Pack to Be Named Later" blog a few days ago and I have 2 boxes...one of which I plan on opening up. I like this years design for sure.

Here are a few cool ones in my box set.