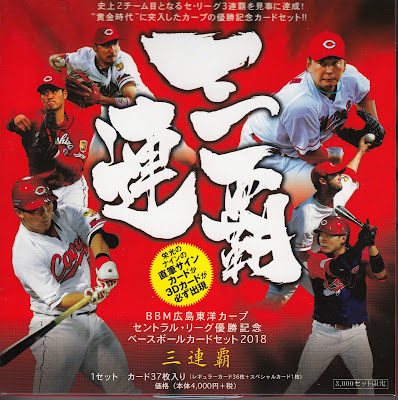 For the third year in a row the Hiroshima Toyo Carp are Central League Champions and for the third year in a row BBM has issued a box set celebrating the victory.  After the somewhat unwieldy name "Realization Of A Great Ambition" in 2016 and the somewhat smoother name "Successful Achievement" in 2017 this year's set is simply called "Three-Peat".  The base set has been getting smaller every year - it was 54 cards in 2016, 45 in 2017 and it's 36 cards this year.  (And obviously if the Carp win next year the size of the set will drop to 27...)

The 36 cards are split between 30 player cards (which also include manager Koichi Ogata) and six "season summary" cards (my term - don't know what the translation of what's on the cards actually is).  Unlike last year's set the player cards in this year's set do not highlight a particular game.  The player selection is pretty much what you'd expect from a Carp team set - Ryosuke Kikuchi, Takahiro Arai, Seiya Suzuki, Yoshihiro Maru, Aren Kuri, Tsubasa Aizawa, Kosuke Tanaka, Kris Johnson, Jay Jackson, etc.  The set also includes what I think is the first Japanese card of Geronimo Franzua who joined the team in May.  The cards do not have the player's name in English on them.  There's a couple good photos but the set suffers from the typical BBM lack of imagination in photo selection.  Here's some sample cards:


The six "season summary" cards each highlight one month of the season (March and April are combined onto one card).  Each card highlights a particular Carp victory for the month with the line score for that game appearing on the back.  For example this one for August highlights the team's 6 to 4 victory over Hanshin on August 15th:


Like the previous two years I bought an unopened box for this set so I got the "special" card.  The "special" card can either be an autographed card or one of 12 3-D "Golden Era" cards.  I was kid of disappointed to not get an autographed card but I did get the "Golden Era" card for Seiya Suzuki who's one of my favorite players so it wasn't a total loss.  Here's the card - it looks much better in reality:

The card is serially numbered #097/189.  The press run for the entire box is 3000.  I don't know if all the 3-D cards are numbered to 189.  If they are, then there's only 732 autographed cards available which means there's slightly less than a 25% chance of pulling an autographed card.

I was disappointed in this set.  I liked the previous two sets as I felt they really told the story of the Carp's season each year.  This feels more like "hey, here's some more cards of the Carp that are just like the other ones for you to buy".  The photos are boring and they don't even show any of the Carp's alternate uniforms this year (although one of them is on the box).  Really the only redeeming feature is the 3-D card of Suzuki and considering how much I ended up paying for the set (5700 yen through Rakuten - 3700 for the set and 2000 yen for EMS shipping which works out to about $51) it really wasn't worth it.  You can see what you think of all the cards over at Jambalaya.
Posted by NPB Card Guy at 4:57 PM

Awesome. BBM has a video on YouTube showing a box opening.