Card Of The Week October 28

Game One of the 2018 Nippon Series between the Carp and the Hawks was yesterday in Hiroshima and it ended in a tie after 12 innings.  (Between Game 3 of the World Series which went 18 innings and Game 1 of the Nippon Series there were 30 innings of baseball played in roughly 13 and a half hours on Friday into Saturday.)  The last time Game One of the Nippon Series ended in tie was in 1986 and the Carp were the home team in that game also.  The Lions ended up winning that Series i eight(!) games and the MVP of the Series was Kimiyasu Kudoh who is now the Hawks manager.  Here's a 1986 Calbee card of Kudoh (#210): 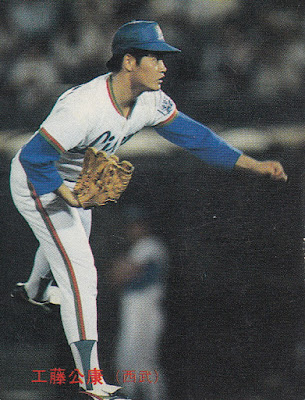