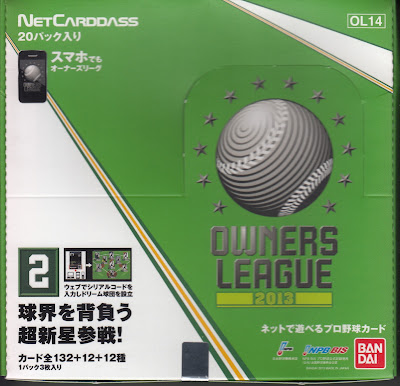 For the third year in a row I've used the Amazon gift cards I got for my birthday to pick an unopened box of Bandai's Owners League cards.  This year I picked up a box of the "02" set from 2013 - my hope was to get a Shohei Ohtani card since this was the only Owners League set that had a card of him in his rookie year. 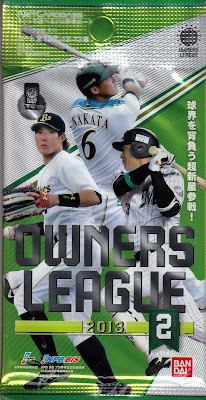 The box contained 20 packs which contained three cards each so there was a total of 60 cards in the box.  As with the other two boxes I opened, the box contained no duplicate cards.  Here's a breakdown by card type of what I got:

I was disappointed that I did not get the Ohtani card from the Infinity cards but I did get a Tomoyuki Sugano card from the same subset so that's almost as good.  Here's an example card from each subset:

One of the attractions for the "04" sets for me has been that since they're issued late in the year they are able to feature players who signed too late to be included in BBM's flagship sets (1st & 2nd Version).  I was surprised to discover that a large percentage of the players in this set were also not in BBM's flagship sets from 2013 - 29 of the 59 non-Legend players in the set did not appear in either the 1st or 2nd Version sets that year.  Probably the most interesting player who's in this set and not BBM's is Wil Ledezma, who appeared in 26 games for the Chiba Lotte Marines that year.  His only other Japanese card that I know about is from BBM's Marines team set from that year.
Posted by NPB Card Guy at 9:44 PM

Bummer on not getting an Ohtani. I actually like the looks of these!