He also appears to have gone by Nobushige for a given name as his Baseball-Reference entry is under that name.

Morishita had a number of menko cards during his career as well as a card in the 1967 Kabaya-Leaf set.  I think he only has a couple modern cards from the 2006 BBM Nostalgic Baseball, 2008 BBM Hawks 70th Anniversary and 2012 Epoch JPBA History Of Best Nine sets.  Here's the cards I have of him:

He also had a card in the 1992 CPBL set (#50).  I don't have this card but I couldn't resist downloading the image of it from the TradingCardDB.com list of Moriwaki's cards: 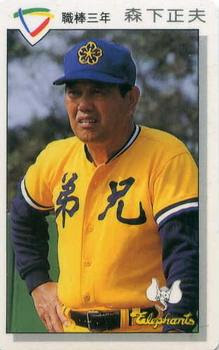 H/T NPB on Reddit's tweet of his Yahoo! obituary.
Posted by NPB Card Guy at 10:09 PM