Card Of The Week October 14

I'm leaving on a week long business trip to Texas this afternoon so I knew I needed to take care of "Card Of The Week" early.  I had kicked around a couple topics - new manager for the Dragons, old manager for the Giants, Koji Uehara becoming the oldest player to ever win a playoff game, etc - but I hadn't really decided on anything.  I figured I'd wait and see how the Climax Series games went today to decide.  I got up late this morning and checked the scores on-line and discovered that a clear choice had revealed itself.

Tomoyuki Sugano of the Yomiuri Giants has had a pretty amazing season this year so far.  He went 15-8 with a 2.14 ERA and 200 strikeouts (in 202 innings) this year.  He led the Central League in wins, ERA and strikeouts so he won the pitching triple crown.  He had an amazing eight shutouts and is considered a lock for the Sawamura Award (if he hasn't already won it - sometimes I miss that announcement).

And then he went and threw a no-hitter against the Swallows in Game Two of the First Stage of the Climax Series today.  He only walked one batter - Tetsuto Yamada - so he was nearly perfect.  It was the first no-hitter in Climax Series history and I believe only the second in NPB post-season history - the first being the Daisuke Yamai-Hitoki Iwase combined perfect game in Game Five of the 2007 Nippon Series.  With the win the Giants move on to the Final Stage of the Climax Series against the Carp starting on Wednesday.

One more good thing for Sugano - it looks like his uncle is set to return as Giants manager now that Yoshinobu Takahashi has resigned. 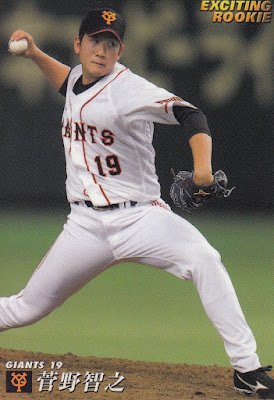 
Thanks! I like hearing about the current star players in Japan.