Card Of The Week October 7

Orix manager Junichi Fukura stepped down a few weeks back and it was announced this week that head coach Norifumi Nishimura would be taking over as manager.  Nishimura's only other managerial experience was with the Chiba Lotte Marines, the team he had spent his entire playing career with between 1982 and 1987.  Taking over the Marines from Bobby Valentine going into the 2010 season Nishimura led the Marines to a third place finish with a record of 75-67-2, just barely squeaking by the Fighters who had a record of 74-67-3.  Improbably the Marines swept the Lions in the First Stage of the Climax Series and beat the Hawks in the Final Stage to advance to the Nippon Series.  They then beat the Dragons in the Series in six games, becoming the first and I believe only third place team to win the Nippon Series (I think the 2017 Baystars are the only other third place team to advance to the Series).  Nishimura led the Marines to a last place finish in 2011 however and though they moved up to fifth in 2012 it wasn't enough to save his job - he was replaced by Tsutomu Itoh for the 2013 season.

Here's Nishimura's card from the 2010 BBM Nippon Series set (#S01) as well as the card showing the team celebrating their championship with the traditional do-age of him (#S71): 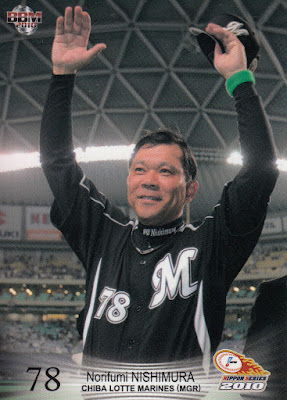 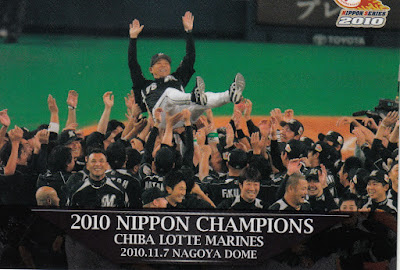 Do you have any cards of him in his active playing days?

Yes, I have a bunch of him. I used one in a "Card Of The Week" post some years back when he was named to replace Valentine as Marines manager.