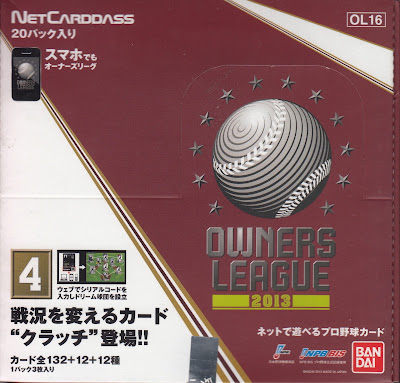 Like I did about a year ago, I recently picked up an unopened box of one of Bandai's Owners League sets from Amazon.com (the US one, not Amazon.co.jp).  Jay Shelton had tipped me off a while back that the boxes could be picked up relatively cheaply so I need to thank him for the heads up.

This time around I bought the "04" set from 2013.  Just to give a little history - Bandai used to issue four sets a year called "01", "02", "03" and "04".  I don't know when during the year the cards were released but the "04" sets came out later than BBM and Calbee's final sets and would frequently feature players who had signed too late to make their flagship sets.  Since I like getting cards of as many different players as I can, the "04" sets are very appealing to me.  And as we'll see in a minute, the 2013

The box had 20 packs containing 3 cards each.  Like the box I opened last year I got 60 unique cards.  Here's the breakdown of insert, short print and regular cards:

Here's examples of each type of card:

The set contains a number of players who didn't make it into any of BBM or Calbee's main sets in 2013.  What I was most interested in was that I picked up cards of a couple foreign players who only pitched in NPB during the second half of 2013 and did not have any other Japanese cards that I'm aware of.  They are Justin Thomas of the Fighters and Tim Corcoran of the Baystars:


One thing you might of noticed - I mentioned that I thought there were two insert set - Legend and New Star.  I got a Legend card in the box but I didn't get a New Star card.  Since Bandai didn't list either set with the checklists in the box, how did I know there was a New Star set?  Not a huge mystery - I had picked up a handful of cards from this set before getting the box and one of them was this New Star card: