Card Of The Week October 8

Shohei Ohtani made what is very probably his last pitching appearance in Japan on Wednesday, throwing a complete game shutout with 10 strikeouts in the Fighters' 3-0 win over Orix (he also hit cleanup in the game.  He is expected to play in the Fighters game against the Eagles tomorrow which is likely the last time he plays in a game in Japan as it is the Fighters' last game of the season.

All of this is with the expectation that he will head to MLB this offseason in some manner - whether it be via the posting system (which is up in the air at the moment) or by Nippon-Ham making him a free agent.  We shall see what happens over the next few months.

In the meantime, here's a card of Ohtani from last year's Epoch Fighters Season Summary set (#01): 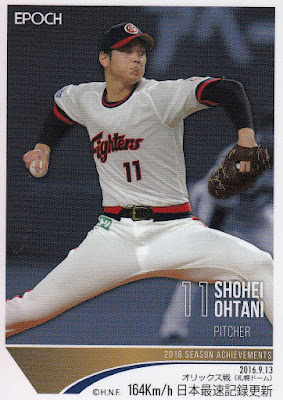 Here are the highlights of Wednesday's game: