Card Of The Week October 1

The Baystars clinched a playoff spot for the second year in a row today by defeating the Carp 13-7.  Baystars pitcher Joe Wieland got the win despite giving up seven runs (six earned) in five innings to raise his record to 10-2.  Wieland is the first import pitcher for the Baystars to ever get into double digits in wins in a season.  Wieland helped his cause today by homering for the third time this year - one of five home runs the Baystars hit in the game. 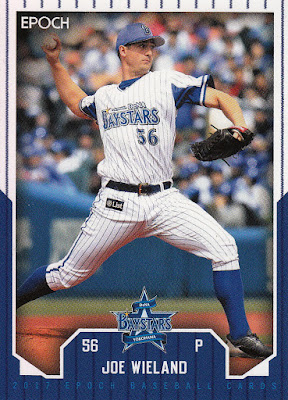 This is one of the cards I got from Ryan yesterday - I'll be writing more about Epoch's team sets in the next few days.
Posted by NPB Card Guy at 4:13 PM