Card Of The Week October 29

The Hawks beat the Baystars 4-3 today to go up 2 game to none in the Nippon Series.  The key play of the game was a play at the plate in the bottom of the seventh.  With the bases loaded with one out and the Baystars leading 3-2, Akira Nakamura hit a single into right field that scored Yuki Yanagita from third.  Kenta Imamiya attempted to score from second on the play as well but appeared to be cut down at the plate for the third out of the inning.  Imamiya was initially called out but Hawks manager Kimiyasu Kudoh asked for a review of the play.  After the umpires disappeared for what seemed like an extended period of time to view replays, the umpires ultimately overturned the call on the field, putting the Hawks up 4 to 3.

Imamiya's other major contribution to the game was robbing Jose Lopez of a base hit in the top of the eighth.  Lopez hit a ground ball that looked like it was going to through the infield but Imamiya went to his right, backhanded the ball and then threw Lopez out at first.  It was a great play although it was probably aided by Lopez's speed or lack thereof.  Here's Imamiya's "God Of Defense" subset card from the 2014 BBM 1st Version set (#376): 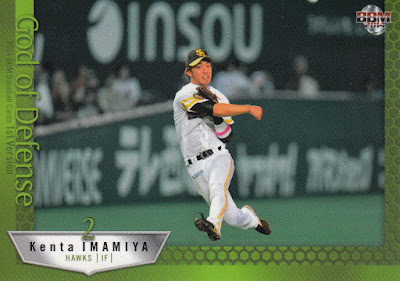