Korakuen Stadium in Tokyo opened on September 11th, 1937 and over the next fifty years hosted some 7172 professional baseball games, the most for any ballpark in Japan.  30 years ago tonight the stadium hosted its final game, Game Five of the 1987 Nippon Series.  The visiting Seibu Lions defeated the Yomiuri Giants that night 3-1 on their way to beating the Giants in the Series in six games.  The last player to throw a pitch at the ballpark was Kimiyasu Kudoh, who struck out Giants second baseman Kazunori Shinozuka to end the game.

Here's a couple of times there's been a good photo of the stadium used on a baseball card:

The photo on the first card is from Shigeo Nagashima's retirement game on October 14, 1974 (I don't actually have this card - I swiped the image from Sean).  The second card shows the installation of artificial turf during the 1975/76 offseason - Korakuen Stadium was the first ballpark in Japan to have fake grass.  On the lower left corner of the final photo you can see the Velodrome - this was torn down in the mid-80's to make way for the Tokyo Dome.

The Tokyo Dome was built right next door to Korakuen Stadium and during the ballpark's final days you could see the Dome peering over the seats behind home plate (like in the card at the top of this post).  Once the Stadium was closed (the formal closing of the park was November 8, 1987), it was immediately torn down.  The Tokyo Dome Hotel now stands in what was right-center in the old ballpark and there's a shopping center and plaza on the rest of the site.

Here's a couple photos from the book "Nostalgic Stadiums Of Kanto" showing the two ballparks together: 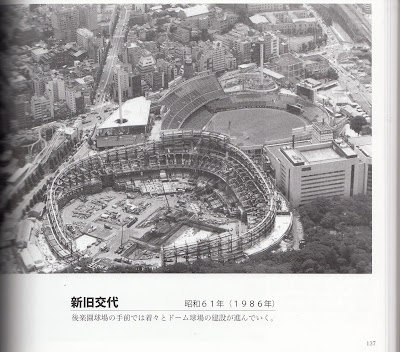 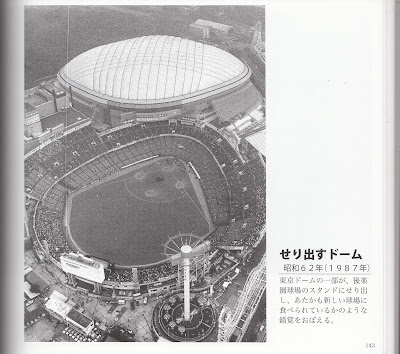 I have a post scheduled for Wednesday that has some sumo photos of their May and November 1944 tournaments in the Korakuen Stadium. Pretty interesting and storied history of the stadium!