Card Of The Week October 15

The NPB playoffs (aka the Climax Series) kicked off yesterday with the second place Tigers hosting the third place Baystars in the Central League and the second place Lions hosting the third place Eagles in the Pacific League.  Both home teams won yesterday but the visiting teams came back and won today so both series are tied up at 1-1.  Since both series are a best of 3 that means there'll be two elimination games tomorrow to see who gets to go face the first place Carp and Hawks in the Final Stage of each Climax Series later in the week.

The pitching matchup between Takahiro Norimoto of the Eagles and Yusei Kikuchi of the Lions yesteday was supposed to be the premier pitching match of the playoffs but Norimoto got lit up for seven runs in four innings en route to a 10-0 loss by Rakuten.  Kikuchi however lived up to his end of the pregame hype, throwing a complete game shutout with nine strikeouts while only giving up five hits and one walk.  Here's Kikuchi's 2011 Bandai Owners League card (#016 from the "04" set): 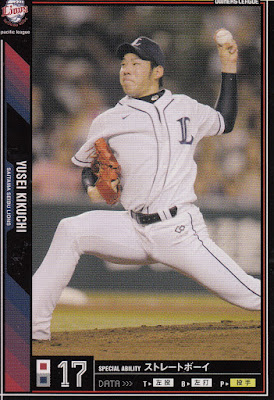