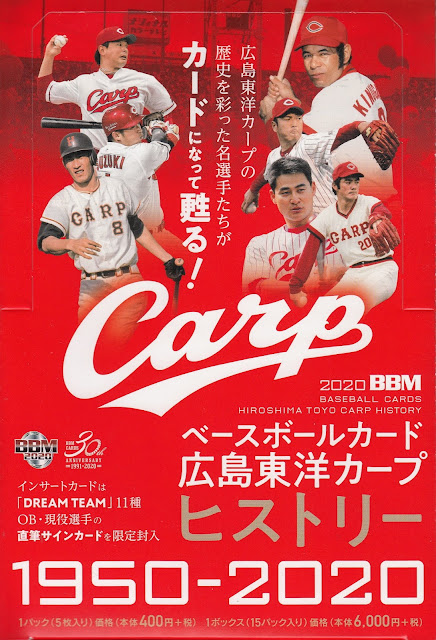 I feel like BBM's kind of stepped up their game with their OB team sets over the last couple years.  After a couple of duds where they really phoned it in (the 80th Anniversary sets for the Tigers in 2015 and Dragons in 2016) they did a couple very nice looking ones (the 2018 Hawks 80th Anniversary and last year's Baystars 70th Anniversary sets).  Their latest one continues this trend.  It's called "Carp History 1950-2020" and is kinda-sorta a 70th Anniversary set for the team as they
were one of the new teams that joined the ranks of professional baseball in 1950 when the 8 team Japan Baseball League transformed into the 15 team Nippon Professional Baseball organization.  BBM had previously done a "60th Anniversary" set for the team in late 2009 so despite their being an 11 year difference in the "cover date" of the cards, it's really only slightly longer than 10 years between their publications.

The base set contains 90 cards which are split into three sections.  There are six cards for "Carp History", 70 cards for OB Carp players and 14 cards for active players from the 2019 Carp.

The bulk of the cards in the set are for the OB Carp players.  As usual this includes both retired players and active former Carp players (although I think the only ones are Kenta Maeda, Yoshihiro Maru and Kan Ohtake).  The players include pretty much everyone that you'd expect it to - Koji Yamamoto, Sachio Kinugasa, Tomoaki Kanemoto, Akira Etoh, Kenjiro Nomura, Hiroki Kuroda, Shota Ohno, Tomonori Maeda, Manabu Kitabeppu and Ryohei Hasegawa.  As usual the bulk of the players are from the 1970's and later but there's a handful of guys from the 50's and 60's (such as Hasegawa, Katsumi Shiraishi, Takeshi Koba and Kazuyoshi Yamamoto).  There's no glaring omissions that I can tell among Japanese players with the possible exception of Yutaka Enatsu (not that that's a surprise - Enatsu hasn't shown up in a BBM set since 2014).  Gail Hopkins is the only gaijin player in the set which means that several Western players who were in the 2009 set (Richie Scheinblum, Luis Lopez, Adrian Garrett and Jim Lyttle) are not in this one.  Brad Eldred is also missing from the set and Marty Brown is the only Carp manager since 1975 to not be included.  I will say that I think BBM missed an opportunity here to include Hall Of Famer Rikuo Nemoto (who managed the team from 1968-72), Joe Lutz (first non-Japanese American to manage in Japan) and/or Alfonso Soriano (who signed his first professional contract with the Carp and played for them in 1997).

The cards themselves are beautiful.  Only a handful of the photos are black and white (mostly for the older players of course) and BBM appears to have dug up photos that they haven't used in cards before.  The players names do not appear in English on the cards at all.  Here's a bunch of examples:

The back of Kenta Maeda's card lists his 2020 team as the Twins so the cards are very up-to-date.

Speaking of the backs of the cards, there's an interesting feature on them.  Take a look at the back of Koji Yamamoto's card: 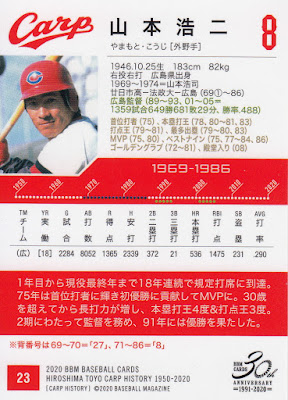 Notice in the middle of the card just above the player's stats there's a little spectrum display showing dots representing all 70 years the Carp have been around.  The dots for the years that the player played for the Carp are filled in with black.  In addition if the player also managed the team (as Yamamoto did from 1989-93 and 2001-05) there are green dots that appear below the dots for those seasons (they appear below to allow for Katsumi Shiraishi's stint as player-manager for the team from 1953-56).


There was one insert set issued with the set and I picked that up as well.  It's an 11 card set entitled "Dream Team" and essentially features the "best" starting lineup for the team (including three pitchers - a left handed starter, a right handed starter and a reliever).  The players are Manabu Kitabeppu (RHP), Yutaka Ohno (LHP), Tsunemi Tsuda (RP), Mitsuo Tatsukawa (C), Takahiro Arai (1B), Ryosuke Kikuchi (2B), Sachio Kinugasa (3B), Yoshihiko Takahashi (SS), Koji Yamamoto (OF), Koichi Ogata (OF) and Tomonori Maeda (OF).  Here's Kinugasa and Yamamoto's cards:

I really like this set.  And I hope that BBM continues their streak of improved OB team sets.

You can see all the cards in the set over at Jambalaya.
Posted by NPB Card Guy at 9:30 PM

Gotta say... that card with the team jogging together is pretty darn cool. Don't think I've seen anything like that before.

A lot of the "Team History" cards in BBM's team anniversary sets have photos like that.