Card Of The Week October 2

Last Wednesday night was an amazing night in MLB.  There were four games that had a bearing on who made the playoffs and who didn't, and in three of them, the team that was leading going into the ninth inning ultimately ended up losing the game.  The hero of one of those ninth innings, Dan Johnson of the Tampa Bay Rays (who played the Hal Smith/Bernie Carbo role to Evan Longoria's Bill Mazeroski/Carlton Fisk) had played the 2009 season in Japan for the Bay Stars.  Here's his BBM 2nd Version card from that season (#733) where he looks almost as happy as he did Wednesday night: 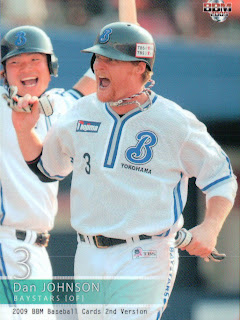