A couple of months ago, I picked up a kind of obscure book on Japanese baseball - Robert Obojski's "The Rise of Japanese Baseball Power". published in 1975.  Among the interesting things I learned in the book was that Masaichi Kaneda had filmed a commercial for Subaru for the American market in the mid-70's.  I figured that this had to be on-line somewhere, so I went looking through You-Tube to see what I could find.

Unfortunately, I struck out.  I couldn't find the video anywhere.  I did, however, find a couple Subaru print ads featuring Kaneda on eBay.  I've swiped the images here: 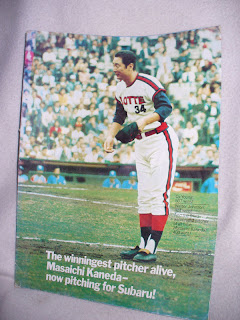 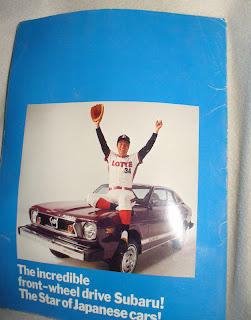 Since Kaneda was managing the Lotte Orions at the time, he's wearing that uniform in the ads, even though he never pitched for them.  And I think that middle picture might actually be from the 1974 Nippon Series - those look like Dragons in the background.
Posted by NPB Card Guy at 8:26 PM