The last set that I got from Ryan in Tokyo that I'm going to blog about is the 2018 Epoch Lions Rookies & Stars set.  This was one of the series of "comprehensive" team sets that Epoch started doing last year to challenge BBM.  I've gotten some cards from a few of the other sets but this is the only complete one of these sets I've gotten.  Although "complete" may actually not quite be correct.

The set has cards for manager Hatsuhiko Tsuji, last year's farm team manager Tetsuya Shiozaki and 67 players.  There are photo variations available for 21 of the players which brings the total number of cards to 90.  The set I got however does not have the photo variations so it's only 69 cards - which is why I say it's debatable whether I have a complete set or not.

Photo variations aside, the set is...ok.  I can't quite put my finger on it but I find it lacking compared to last year's BBM Lions "comprehensive" set.  It's not the photos - Epoch's got similar issues to those that BBM has with photo selection but this set actually has a little more interesting shots than the BBM one.  It may just be the card design itself (although last year's BBM set's design wasn't all that great either).  Or it may be that I like the silly little subsets that BBM puts in their sets to pad them out to 81 cards - Epoch doesn't do those.

I did a comparison of the contents of the two sets.  The BBM set contained a card for one player who's not in this set - Daiki Enokida, who was traded to the Lions from the Tigers during spring training last season.  BBM's set came out later in the season than this one which made it easier for them to include him.  The Epoch set contains cards for three people that aren't in the BBM set - the previously mentioned Shiozaki and the Lions two ikusei players - Masato Saito and Wataru Takagi.


Here's what the backs looked like - they used a cropped and zoomed in version of the photo on the front: 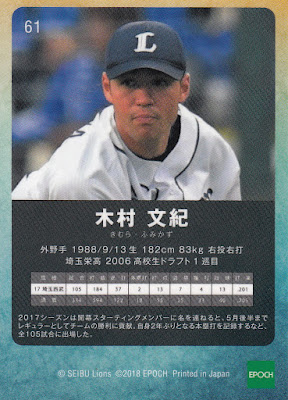 I'd considered getting this year's edition of this set when I was in Japan - I actually had one in my hand at Coletre for a while - but I ultimately decided against it.

You can see all the cards over at Jambalaya (as usual).
Posted by NPB Card Guy at 10:26 PM