I began my day on Monday, May 27th by catching the Shinkansen back to Tokyo from Sendai.  When I got there in late morning I went to my hotel to drop off my luggage and met up with Ryan.  We exchanged the cards we had for each other and went off to spend the next few hours at card shops.  We headed up to Ikebukuro first as Coletre opened at 1100, the earliest of the shops we planned on hitting.  We next moved a few blocks south to Mint Ikebukuro.  From there we hopped on the Yamanote line and went two stops counter clockwise to Takadanobaba and Quad Sports, stopping for lunch on the way.  (I plan on doing separate posts to talk about the card shops.)

Ryan had a doctor's appointment he had to leave for so we parted ways at Quad Sports (although not before he discovered that the store would be moving across the street and about a block closer to the train station in the next week).  I had planned on heading to Mint Urawa but between the heat (it was over 90 degrees each of my first three days in Japan), my ongoing recovery from hip surgery and the fact that I'm woefully out of shape, I didn't have it in me to make it up there that day.  It didn't help that I'd be trying to go in the middle of the late afternoon rush hour either.  I headed back to my hotel and called it a day.  Luckily there was an Udon place next door to my hotel where the wait staff spoke some English and were very patient with me so I didn't have to go far for dinner.

I started working my way towards western Japan on Tuesday morning, although my first stop was Odawara, just about a half hour away from Tokyo Station on the Shinkansen.  I was meeting up again with Ryan who is currently living there to go to Mint Odawara which is just a few blocks from the train station.  I couldn't stay too long though because I needed to catch the Shinkansen for Nagoya, my stopping point for the next two days.  I got into Nagoya in the early afternoon and again went to my hotel to drop off my suitcase and meet up with a friend to go to card shops with - this time it was Sean.  We first walked over to Nagoya BITS which was just a few blocks away from my hotel.  Then we hopped on the subway to go to Mint Ponyland.  Sean needed to head home after that so we headed back to my hotel where I was able to give him some cards I brought for him.  I thought about heading to the other card shop in Nagoya - Match Up - after Sean left but again I was pretty tired (and it was raining kind of hard) so I decided against it.  I ended up at a nearby restaurant for dinner that night where they didn't really speak any English and didn't have an English menu.  I was a little concerned about what I was going to end up with but with the help of Google Translate I managed to order a fried chicken breast with some sort of sauce on it and a beer - it turned out to be a great meal.

I didn't have a whole lot planned for Wednesday in Nagoya, at least not during the day.  All three card shops in Nagoya were closed on Wednesday so I wasn't going to be able to go to Match Up.  Given how worn out I was after my first four days of the trip having a day that I took it easy wasn't a bad idea.  I also let practicality win out over vanity and started walking with a cane again, something I had stopped doing a few weeks earlier at home.  Given I was walking over six miles every day and was still out of shape it really helped me out and I was glad I had packed it in my suitcase just in case.

I did have some things planned for the day, however.  One thing I was very disappointed about when I was scheduling my trip was that the Dragons farm team was not going to be playing at home when I was in Nagoya.  The farm team plays at Nagoya Stadium which was the home of the ichi-gun Dragons until they moved in the Nagoya Dome in 1997.  I had hoped to see a game there but it wasn't to be - in fact they wouldn't even be home when I went through Nagoya the following week on my way back to Tokyo.  What I could do though is go over and walk around the ballpark and maybe even go into it if it was open at all.

Here's what Nagoya Stadium looked like in the early 1990's:

It used to seat 35,000 people when the Dragons played there but in the 22 years since they moved the park has gradually been downsized to the point that the maximum capacity now is 4,883 (there's a bit of chronology of the downsizing of the park on its Japanese Wikipedia page).  A lot of the stands have been demolished and the light towers have all been taken down.  The pedestrian ramp you see in the foreground is long gone - the Dragons' indoor practice facility sits in the space it and the parking lot took up.

To get to the ballpark you take a JR Tokaido line train to Otobashi Stadium and walk about a half mile west.  You have to cross under the Shinkansen tracks to get there (you can see the tracks in the lower left corner of the above picture).

I did a loop around the park and associated facilities, trying to peer in to see the field as much as I could.  I could see and hear players working out on the field but the park was closed - I asked a guard at the parking lot behind home plate if I could go in and he said it was not open to the public.  Here are a bunch of photos I took while walking around it:

After leaving the ballpark I made a stop at a store called Mandarake.  Mandarake is a chain of vintage toy stores in Japan.  Sean had recommended that I take a look at them.  I wandered around the area around the store a little and then headed up to the Oasis 21 Mall to take a look at the dinosaur topiaries (that have seen better days): 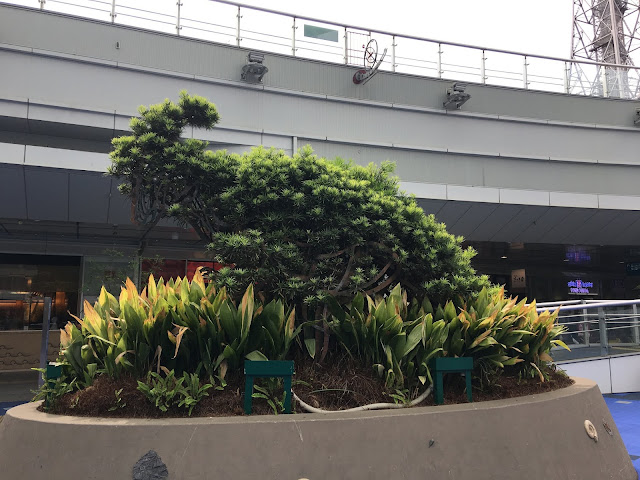 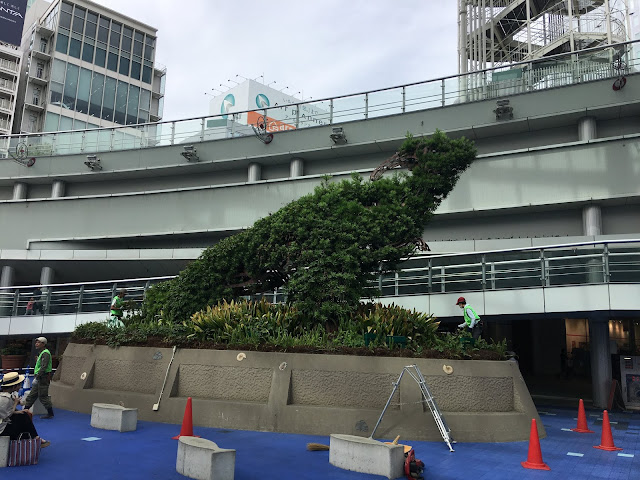 It was mid-afternoon by this point and I headed back to my hotel to rest up for the evening's main event - the Baystars-Dragons game at Nagoya Dome. 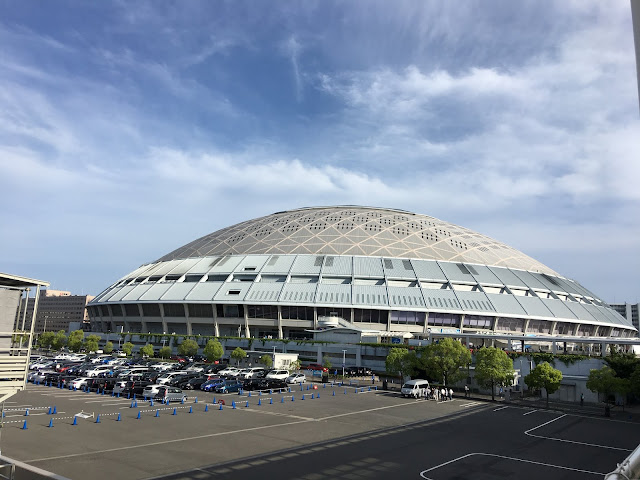 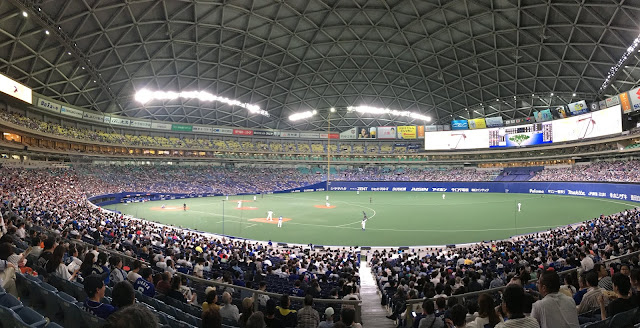 The Dragons and the Lions are my two favorite Japanese teams so I was really looking forward to seeing the Dragons at home.  The Baystars took an early 1-0 lead but the Dragons tied it up in the bottom of the sixth.  The game went into extra innings - I started to wonder if I might see a 12 inning tie which would give me a chance to share this video on Facebook - but the Baystars pushed a run across in the top of the 11th off Dragons closer Hiroshi Suzuki.  DeNA's closer Yasuaki Yamasaki came in and got his seventh save of the season despite giving up two hits.  Final score was 2-1.  I had another early morning Shinkansen trip scheduled for Thursday so I headed straight back to my hotel after the game and went to bed.
Posted by NPB Card Guy at 9:18 PM

Great post, it was a lot of fun meeting up with you in Nagoya. I have never been out to the old Nagoya Stadium, I've seen it from the train but not closer.

I used to live just a few blocks from Oasis 21 when my son was born, we used to walk over there a lot with him so he could see those dinosaurs (parasauralaphus) which he liked a lot. Unfortunately Nagoya TV Tower, which is just next door, was closed during your visit - they are renovating the entire park around it. Its worth a visit when its open, you get a good view of the city from the observation deck.

Looking forward to seeing more posts about the rest of your trip!

"I couldn't stay too long though because I needed to catch the Shinkansen for Nagoya, my stopping point for the next two days."

As a guy who's been to Mint Odawara (only twice but still), all I can say is that you didn't miss much. Last time I went they had barely any baseball, but were well stocked with idol stuff. Though granted that was circa 2012 :P.

@Sean - yeah, I was disappointed Nagoya TV Tower was closed although with how cloudy it was on that Wednesday I probably wouldn't have had much of a view.

@Zippy Zappy - I can't speak for how it was in 2012 but I really liked Mint Odawara. They had a lot of baseball stuff I was looking for - I actually was disappointed I had to leave to catch my train.