Stunning news out of the Netherlands yesterday - former Tohoku Rakuten Golden Eagles pitcher Loek Van Mil has passed away at the age of 34.  Van Mil played professional baseball in four different countries on four different continents.  He played for MR.Cocker HCAW and Curacao Neptunus in the Dutch Major League in the Netherlands, in the Twins, Angels, Indians and Reds organizations in the US in North America, played for the Eagles in Japan in Asia and played for Adelaide and Brisbane in the Australian Baseball League.

He spent the 2014 season in Japan but spent most of his time with the Eagles' farm team.  He only got into 7 games with the ichi-gun team.  There were only Japanese three baseball cards I know of for him that year - BBM 2nd Version #410,  BBM Eagles #22 and Eagles team issued set #69.  Of these I only have the 2nd Version card: 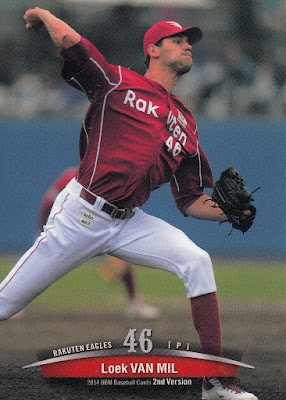 Van Mil pitched for the Netherlands National Team on several occasions.  He was selected to play in the 2008 Summer Olympics but had to bow out due to an elbow injury.  That injury also prevented him from playing in the 2009 World Baseball Classic.  He played in the WBC in both 2013 and 2017 and also played in the inaugural Premier 12 in 2015.
Posted by NPB Card Guy at 9:15 PM