Card Of The Week July 21

Things weren't looking good for the Lions Friday night as their game against the Orix Buffaloes moved into the bottom of the ninth inning.  They were down 4-1 and had been held to only four hits so far.  But they rallied to tie the game on a three run home run by Yuji Kaneko.  The game went into extra innings until with one out in the bottom of the eleventh Lions third baseman Takeya Nakamura came to the plate:

Nakamura's sayanora home run was the 400th of his career.  Nakamura is second to Shinnosuke Abe of the Giants in career home runs by active NPB players - since Abe is only two home runs ahead of him and not playing much I would expect Nakamura to be first within another couple weeks or so.  Here's Nakamura's card from the 2017 Epoch Lions set (#24): 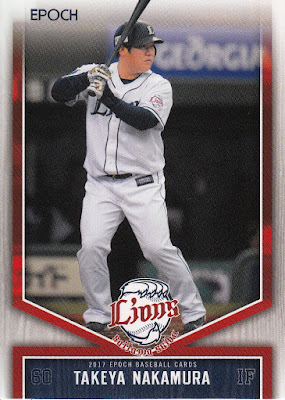 I did a post about four years ago (when he reached 300 home runs) about Nakamura likely being the next player to achieve 500 home runs in NPB.  I still think he's the most likely to do it (especially when you see that number 3 on the active home run leader board is 126 behind him and 42 years old!) but it's much less likely.  Nakamura will be 36 next month and has had difficulty staying healthy - he's only played more than 120 games in a season four times in the 10 seasons before this one.  On the other hand he's amazingly productive even when he doesn't play much - he hit 28 home runs in 97 games last season.  You've got to figure it's going to take at least three, probably four more seasons for him to get near 500.  I'm hoping he can stay healthy and productive enough to do it.
Posted by NPB Card Guy at 1:56 PM