Card Of The Week July 14

Yesterday Hanshin Tigers outfielder Koji Chikamoto became just the second player ever to hit for the cycle in an NPB All Star game.  Chikamoto went 5 for 5 in all with two doubles, a triple and a home run, scoring three runs and knocking in two in the Central League's 11-3 pounding of the Pacific League at Koshien Stadium.  Atsuya Furuta is the only other player to perform this feat, having done it in one of the games in 1992.  Here's a promo card of Chikamoto from the 2019 Epoch NPB set (#427): 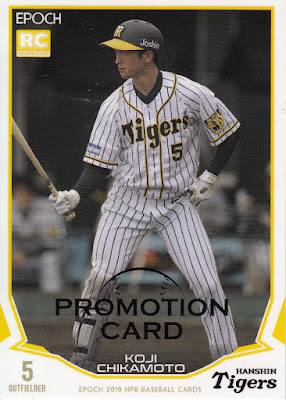 Epoch's NPB set came out in late May while I was in Japan.  I was able to get one at Mint Urawa (doing a post on the set is on my to-do list along with a ton of other stuff).  Many of the card shops were giving away promo packs for the set that contained a single promo card.  I ended up being given 10 promo packs in total - one at Mint Sendai, one at Coletre, two at Mint Odawara, two at Mint Ponyland, one at Mint Hiroshima, two at Mint Hakata and one at Mint Urawa.  (Actually I think I got four at Mint Odawara but I gave two to Ryan.)   All 10 cards I got were different so Ryan and I think pretty much every card in the set is available in promo form.  Ryan suggested it would be possible (although very difficult) to put together the complete 432 card set using only promo cards - I guess I'm only 422 cards away now!
Posted by NPB Card Guy at 11:38 AM