I started my day on Friday, May 31st with a visit to the Osaka Aquarium.  Unlike my visit to Yagiyama Zoo in Sendai on Sunday there was no baseball-related reason that I went there - I just wanted to see some whale sharks and manta rays. 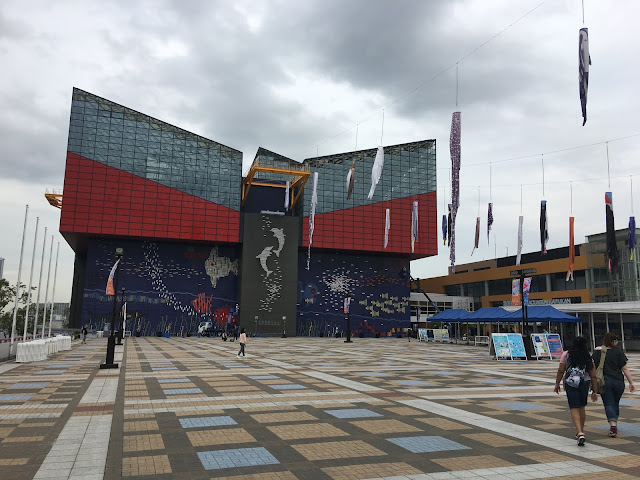 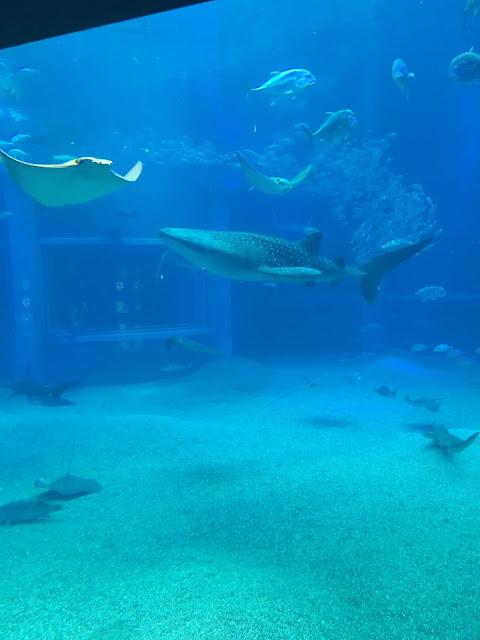 I got there not long after they opened and only stayed for an hour or so.  I think I left at a good time because there were a lot of people (including several groups of elementary school aged kids) lined up to go in as I left.

My next stop was back at Koshien - the Tigers farm team was going to play a Western League game there that afternoon at 1230 against the Hawks farm team.  Normally the Tigers farm team plays in Naruohama, a ballpark only a couple miles away from Koshien.  I had considered attending the game they played there the day before against the Buffaloes but decided to go to this game instead to get to spend more time at Koshien.  (Actually I had considered going to BOTH games but decided I wanted to be able to see more of Kansai than the inside of three ballparks.)  Also Naruohama isn’t much of a ballpark (although much more of one than Seibu #2 which I would see the following week) and there’s no protection from the sun there.

Once I got off the train near Koshien however I had two things I wanted to do before going to the game.  The first was very quick and unrewarding.  I had somehow gotten it into my head that the Colonel Sanders statue that had been recovered from Dotonbori Canal in 2009 after being thrown in by jubilant Tigers fans in 1985 had been restored and was at the KFC store near the Stadium.  I walked over to the store and looked around but didn’t see it.  The clerk behind the counter asked if she could help me and I tried to explain what I was looking for to no avail.  Finally I got out my phone and typed “I’m looking for the statue that was thrown in the river in 1985” into Google Translate and showed her the corresponding Japanese text.  I could see the light of realization go on in her eyes when she read the text.  She told me that no, the statue wasn’t there.  I think she tried to tell me the statue was in the ballpark itself but I’m not sure I understood her correctly.  When I eventually got into the stadium for the ballgame I discovered that the KFC was not open for the farm team game so if the statue is there, I didn’t get to see it.

I was more successful on the second thing I wanted to do - The Museum Of Hanshin Koshien Stadium.  The Museum is located on the back side of the Stadium, behind the left field stands.  It costs 1000 yen to get in and they have an English language floor map although it doesn't give a lot of detail about the exhibits. 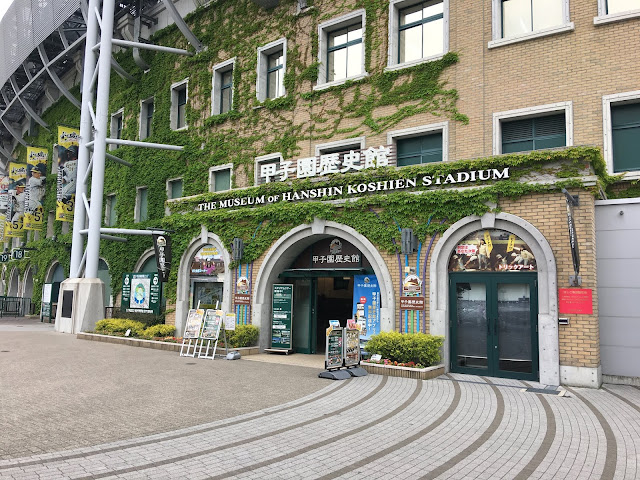 The museum is mostly divided between exhibits for the high school baseball tournament and exhibits for the Tigers.  There's also a display for the Koshien Bowl.  The Museum stretches behind the back of the scoreboard and on non-game days you can go to some sort of viewing area there to see inside the ballpark - unfortunately this was closed due to the farm team game.  The narrow hallway behind the scoreboard had an exhibit on manga that featured Koshien and replicas of Hall Of Fame plaques of players either associated with the Tigers or who had played in the high school tournaments (or both).

I found the museum to be very interesting although I have to confess to not knowing what a lot of what I was looking at was.  I was a bit rushed since I wanted to get into the ballpark before the game started so I didn't spend as much time as I would have liked.  I took a ton of pictures but I will mercifully only share a handful of them: 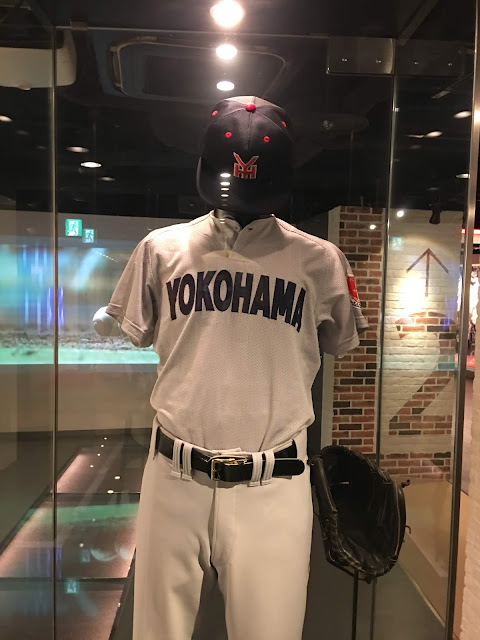 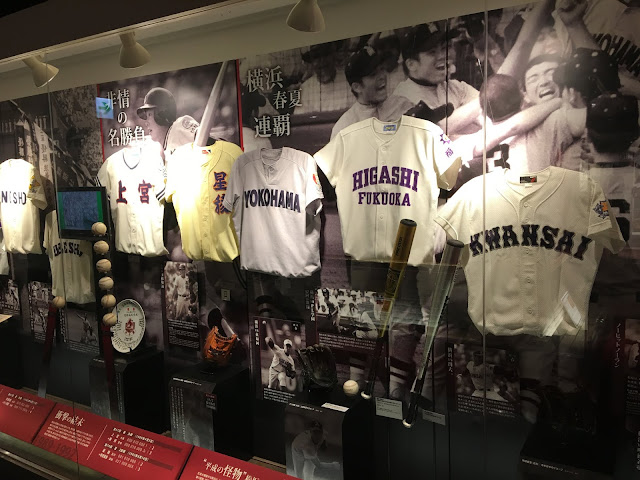 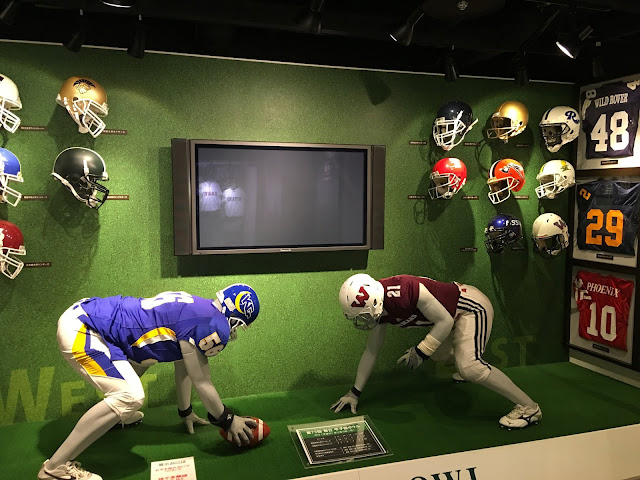 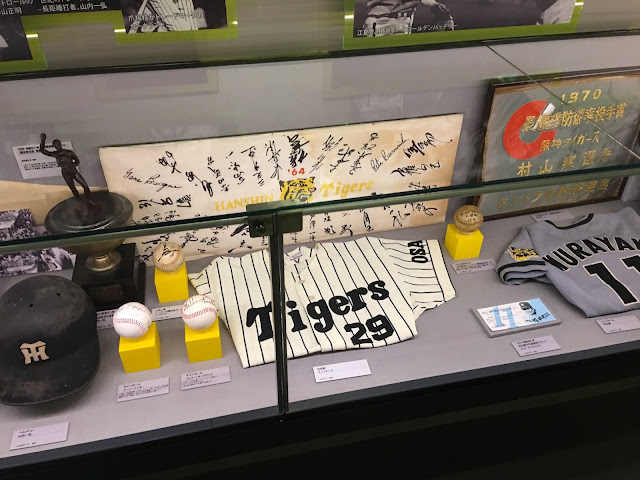 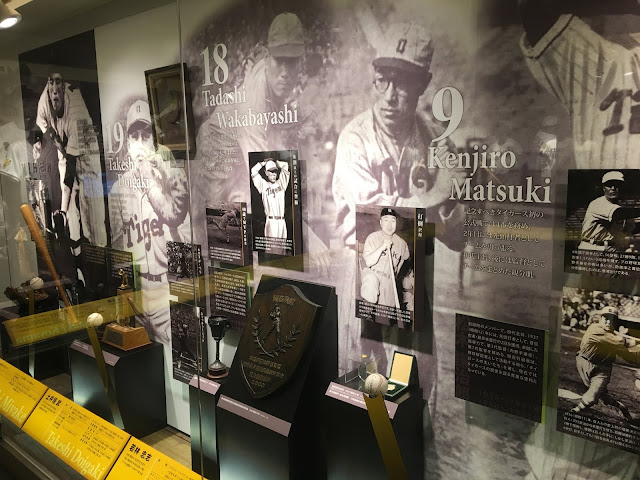 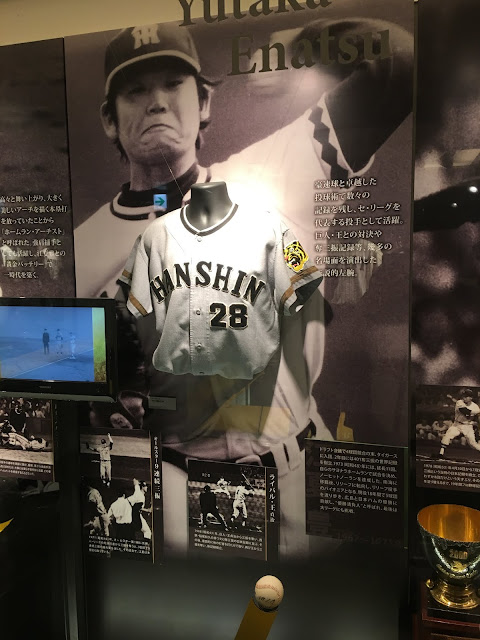 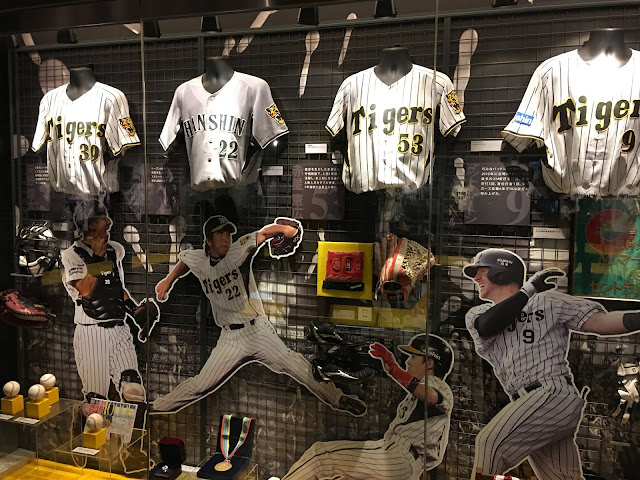 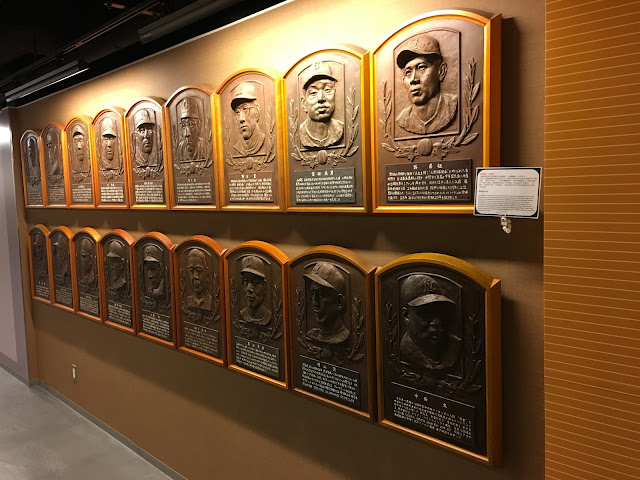 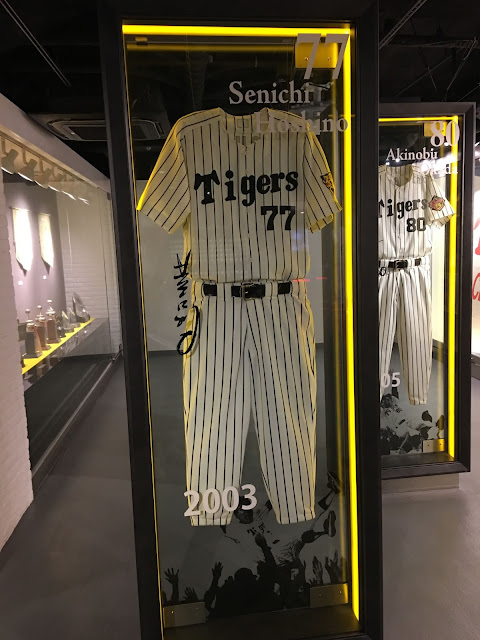 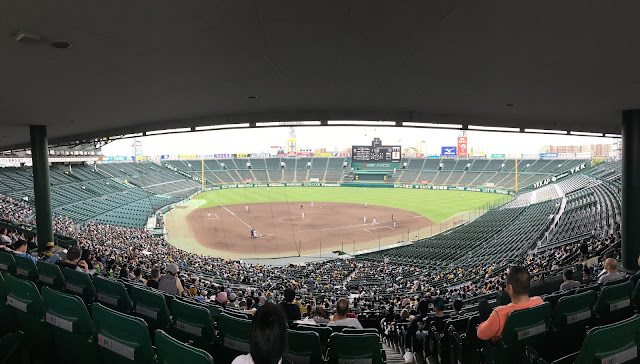 Tickets for the farm team game were 1000 yen.  The only seating area open was the area right behind home plate.  It was a very odd experience being there with a crowd of less than 3000 the day after having been at a Tigers-Giants matchup with almost 40,000 other people.  The strangest thing was how quiet it was.  There were no cheering sections and most of the time the fans watched quietly, applauding when the Tigers got the Hawks players out.  Most of the sounds you heard were either the players on the field or cars passing by on the Hanshin Expressway just outside the Stadium (the elevated highway is maybe 20 feet from the back row of seats behind home plate).  In fairness to the Tigers, they did have a couple cheerleaders come out with the farm team mascot and dance to the team's fight song but there weren't many jet balloons that went into the air:


The game itself wasn't particularly memorable.  The Tigers scored a run in the bottom of the first and the Hawks tied it up in the second.  Hanshin scored two in the fifth inning to take the lead for good although the Hawks made it a little closer on a solo home run by Oscar Coles Colas, an ikusei player who three weeks later was added to Softbank's 70 man roster.  The final score was 3-2.  The most interesting thing about the game was a pinch hit double by Fumihito Haraguchi, who was working his way back to the ichi-gun roster after being diagnosed with colorectal cancer.  He returned to the top team about a week later and homered in both All Star games last weekend. 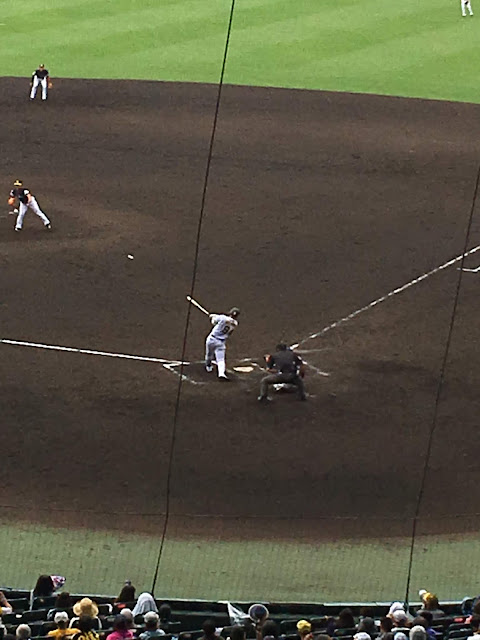 As soon as the game ended I headed back to Osaka as I had tickets for the Buffaloes game against the Fighters that evening.  Since the train station wasn't as crowded after the farm team game as it had been the night before I was able to notice something odd with it - there was a tree growing in the middle of the station: 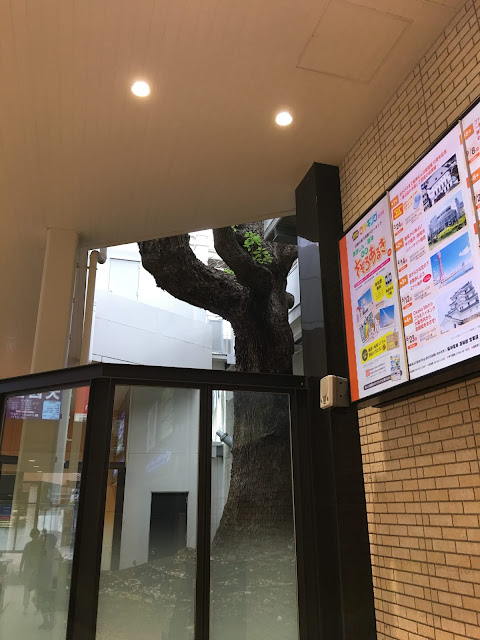 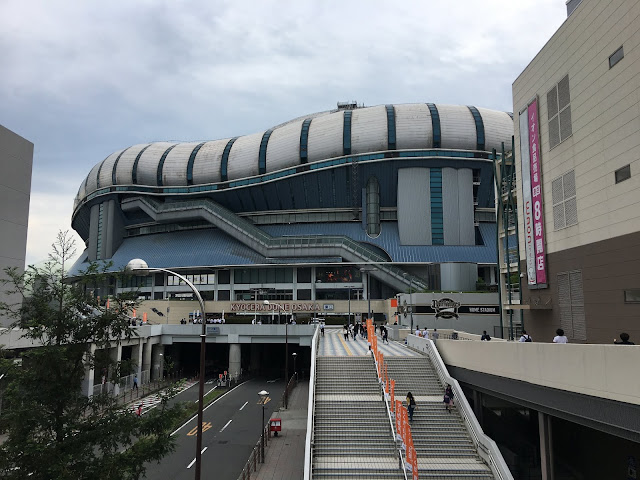 My seats at the Osaka Dome were very interesting - they were in the second row just behind first base.  This sounds like great seats (and they were pretty good) but they had one flaw - they were behind the on field seats ("Excite" seats?) that are in front of the netting.  Still these were probably the best seats I had for any of the games I went to:

The net prevented me from getting a lot of decent photos though.

The game turned out to be one of the more interesting ones I saw in Japan although also one of the most sloppy.  Takayuki Katoh started for the Fighters and I believe the intent was to only have him pitch for a couple innings.  But two things happened - the first was that he kept his pitch count very low and the second was that he wasn't giving up any hits.  He kept the no-hitter going until the eighth inning when Orix's leadoff hitter Tatsuya Yamaashi singled.  Meanwhile the Fighters had scored a run in the fifth inning when Orix starting pitcher Taisuke Yamamoto tried to pick off a runner on first and made a bad throw which allowed Shota Hiranuma to score from third.  The Fighters loaded the bases in the top of the eighth and then scored three runs on an error by first baseman Hiroyuki Shirasaki, a walk and a sacrifice fly.  The final score was 4-0 in favor of the Fighters.

Here's the highlight video for the game from Pacific League TV:

Thanks for the posts. Very informative and interesting. No Colonel Sanders statue, how sad. :-(

Great post! I've been enjoying all of the trip reports.

One question. I saw that you went to ni-gun and Big 6 games. Did you buy your tickets in advance? Or did you buy them when you got to the games? I'm going to each later this season and trying to determine whether I need to buy them before my trip.

I bought the ni-gun and Big 6 tickets at the ballpark. A lot of the ni-gun games are free - the only reason I had to pay for the Tigers game was because it was at Koshien. I went to the Lions ni-gun game the following week and there was no charge there. I did have to pay for a ticket (and had an actual reserved seat) at Kamagaya, the Fighters ni-gun ballpark.

My take on it is that there's no reason to buy the farm team tickets in advance (and in fact in may not be possible). For Tokyo Big 6 it's probably not necessary unless you're going to the Waseda-Keio game (which traditionally is the final weekend of the season). You might check with Deanna Rubin to get advice from someone with much more experience than me.

For the benefit of anyone looking at this thread in the future, I was able to buy both the Big6 and ni-gun (Dragons) tickets at the ballpark without a problem. Each time there was plenty of open seating.

More generally, Dave, thank you for the detailed trip summary. It was very interesting, and really helpful for anyone planning a trip of their own.

I'm glad my posts were helpful to you - my goal in writing them (besides the bragging) was to help out other folks doing similar trips so I appreciate the feedback. Thanks so much!