There was an auction on Ebay recently (actually not an auction as it was just for sale) for a "Japanese Baseball Memorabilia Lot of 112 Giants Stickers Cards and more".  There were 10 pictures of the lot but not a great deal of description of what was in the lot.  I dithered for a few days if I wanted to buy it as it originally was $45 with $9 shipping but after the seller dropped the price to $40 I decided to pull the trigger on it.  The box was delivered earlier this week.  Here's what was in it.

The thing that intrigued me most from the photos on the original listing were several items featuring Japanese players from the 2013 World Baseball Classic.  I didn't have any sense of scale in the pictures so I didn't know if they were cards, postcards, banners or whatever.  It turns out they are bumper sticker sized stickers: 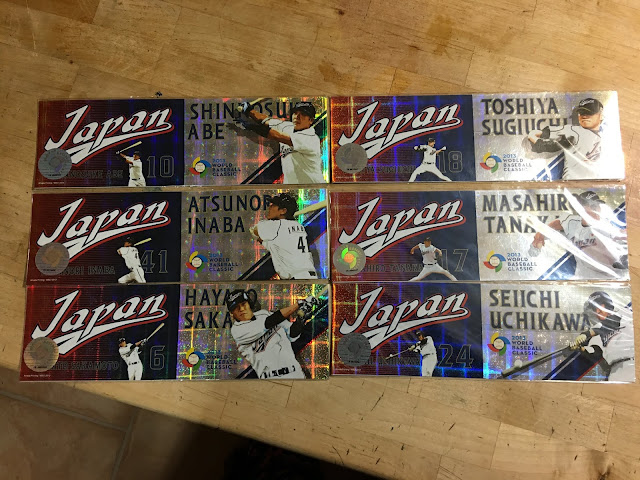 Probably what I was most excited to find in the box was a bunch of Giants team issued cards.  There were 10 "Players Day" cards from 2016 (which look like they each commemorate a Giants victory) as well as a card commemorating Shinnosuke Abe's 2000th hit in 2017: 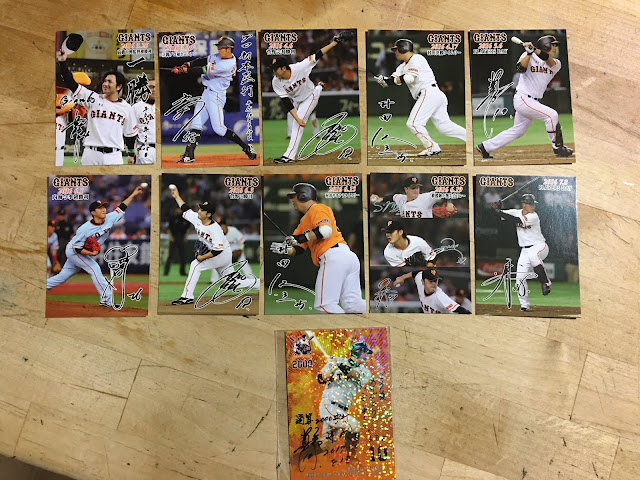 There were also 10 roughly card-sized "Giants Pride" stickers from 2013: 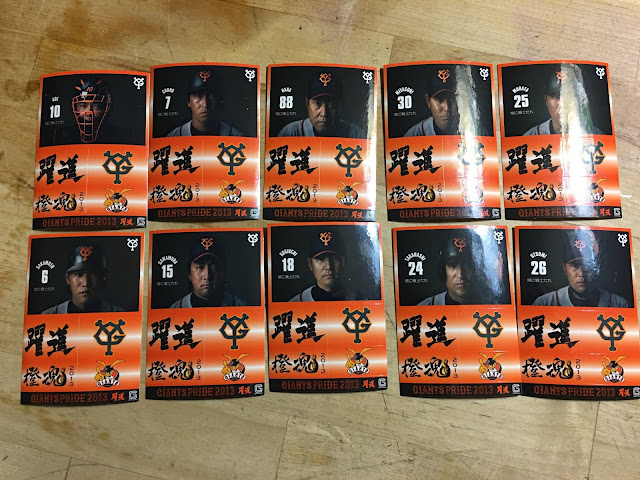 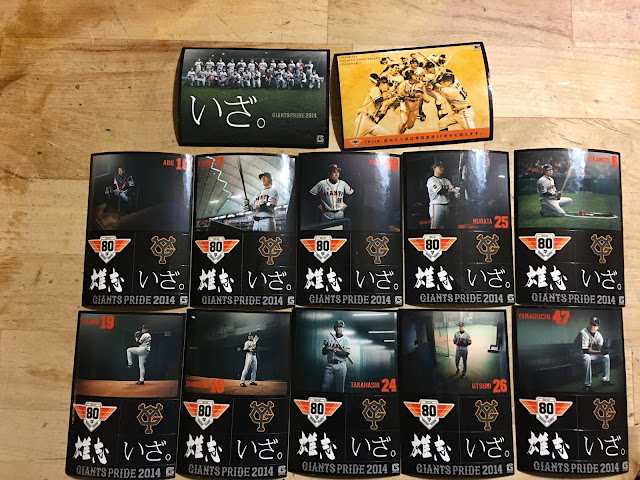 There were another six larger (around 3 inches by 5 inches) but kind of similar stickers that I think were from 2019 although I don't know for sure: 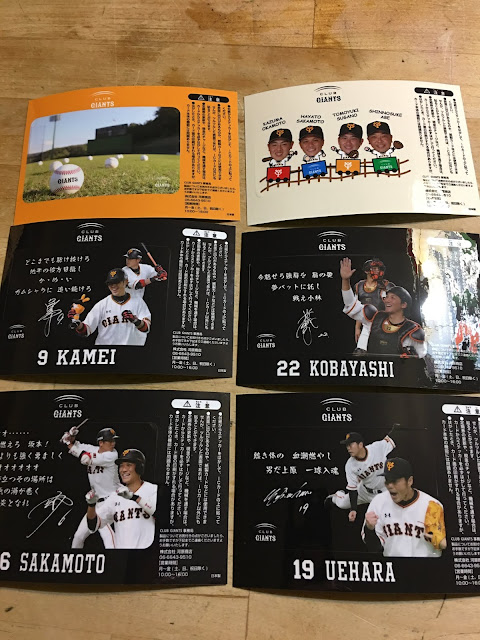 There were also a bunch of postcards in the lot.  These six celebrate the Giants pennants in 2012 and 2013 - actually I'm not positive about the top one on the left but John Bowker's in the photo and those were the two seasons he was with Yomiuri so it's one of those years. 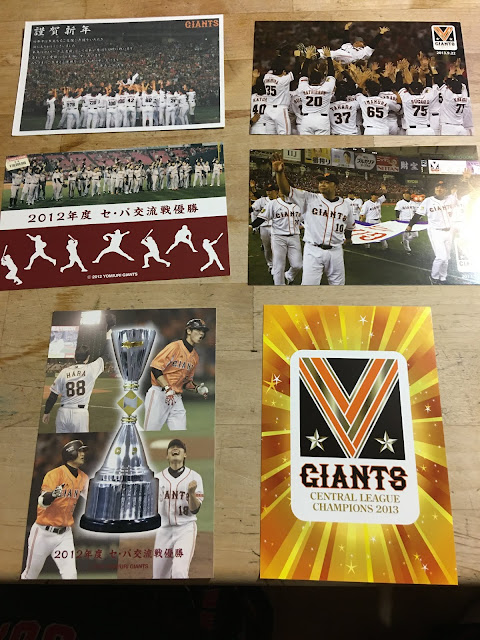 These postcards celebrate the May 5, 2013 ceremony at Tokyo Dome when Hideki Matsui and Shigeo Nagashima received the People's Honor Award: 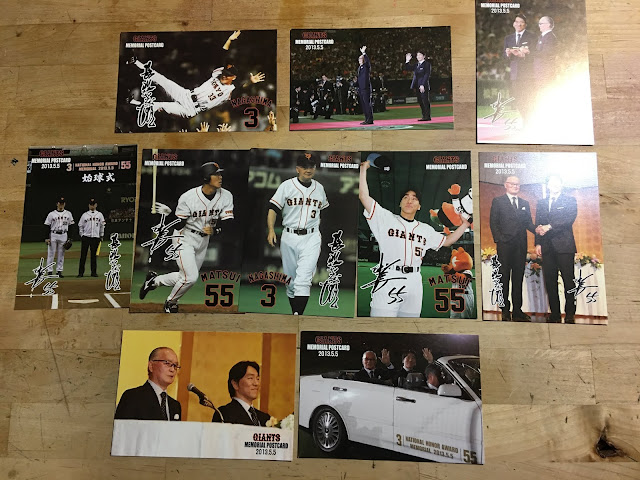 This set of postcards commemorates the highlights of the Giants' 2013 season.  The postcards were sold as a connected set with perforations between the cards.  I have not separated the postcards (and I don't plan to): 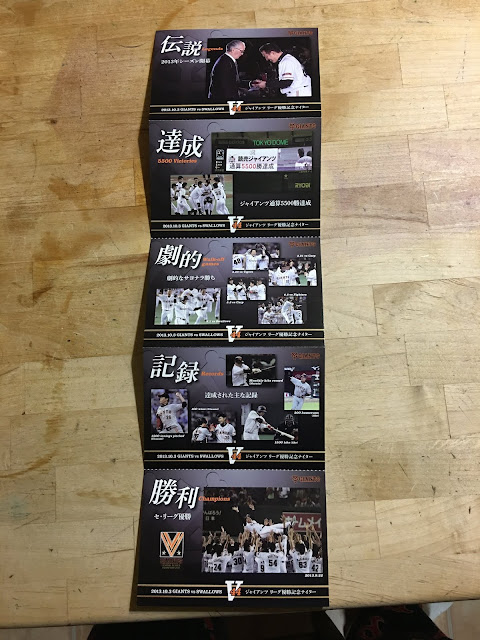 The bulk of the items in the box are these sticker packs.  There's about 35 of them (well 36 but one's a duplicate) for the Giants.  I've split them up into groups that kind of make sense.  First up are a group of "player nameplate" stickers (for lack of a better term): 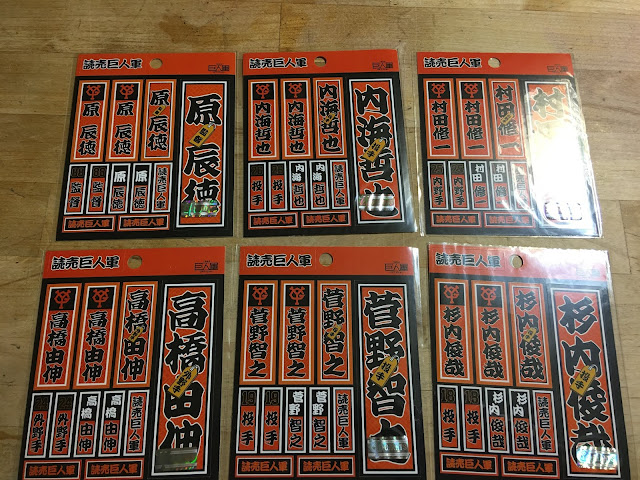 Next are another group of "player nameplate" stickers but these include the players uniform back: 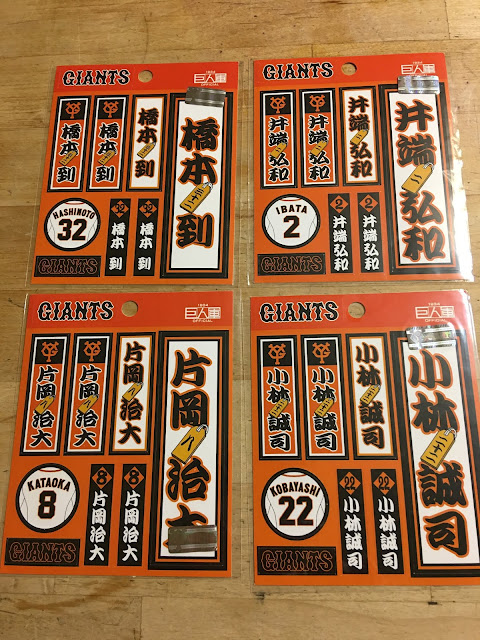 The next group celebrate various championships in 2012, 2013 and 2014.  Some of these also have "player nameplates" on them but unlike the previous ones there are multiple players on the sticker sheets: 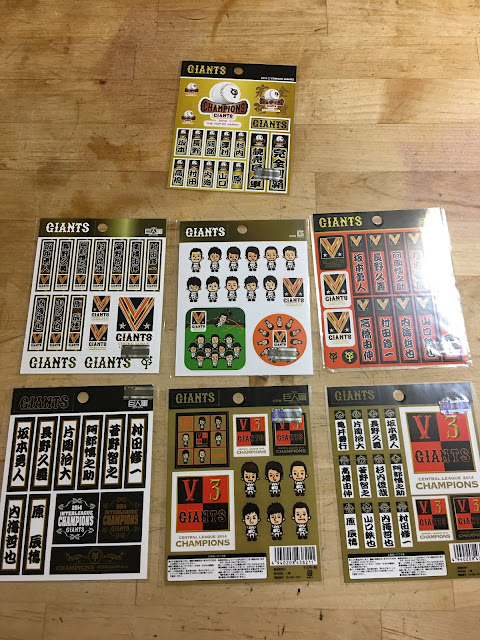 A couple more sheets for the Giants.  One of these is obviously from 2014 since it has the 80th Anniversary logo on it. 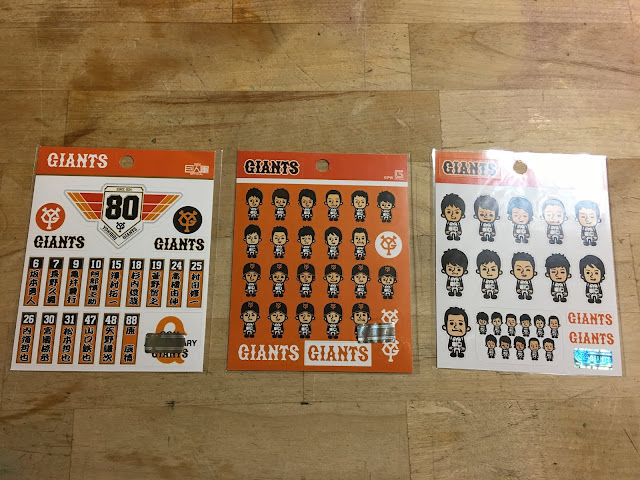 This batch of stickers feature the Giants mascots: 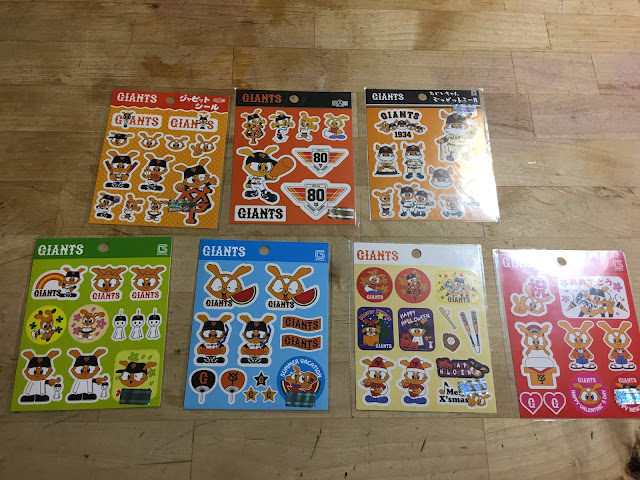 These stickers feature a crossover of some sort with Mighty Atom (aka Astro Boy).  I don't know if this was a tie in with the movie from 2009 but I kind of doubt it as there's nothing else in the box that appears to be from earlier than 2012. 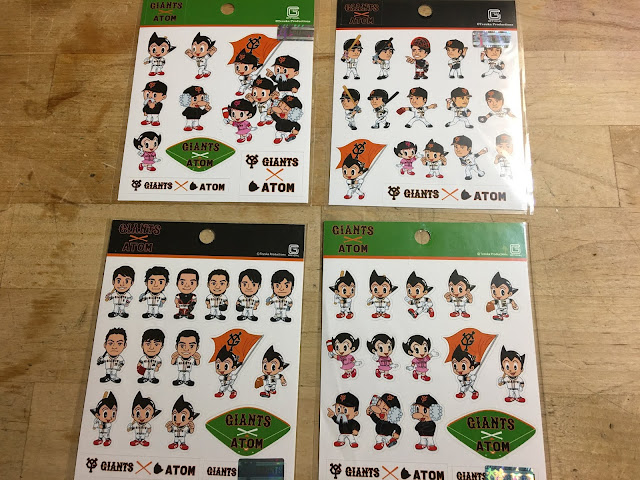 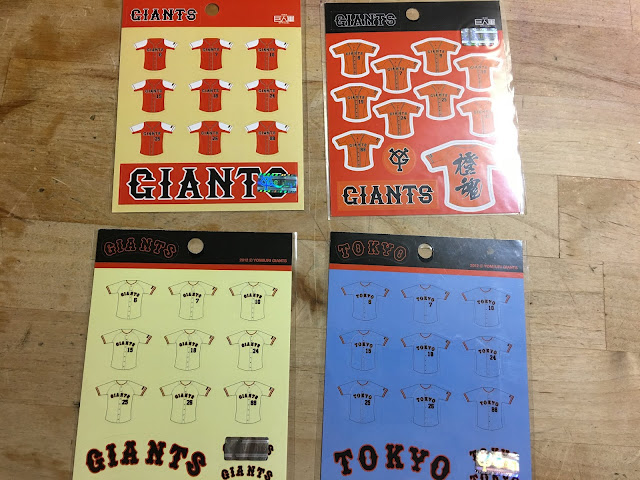 There were some other Giants items in the box.  Here's a bunch of "home jersey" stickers that were some sort of tie-in with Baskin-Robbins as well as a couple items that I'm not really sure about: 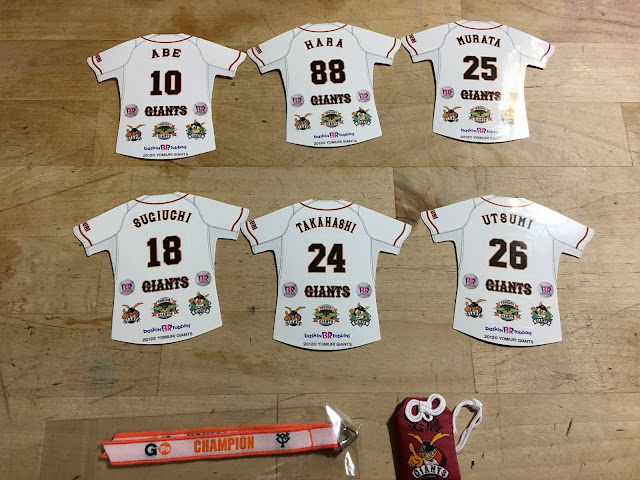 Here's some other random Giants stuff from the box.  The package at the top contains three magnets.  I'm not quite sure what the thing on the left with the ribbon around it is but it's some sort of stationary thing.  Everything else is a sticker. 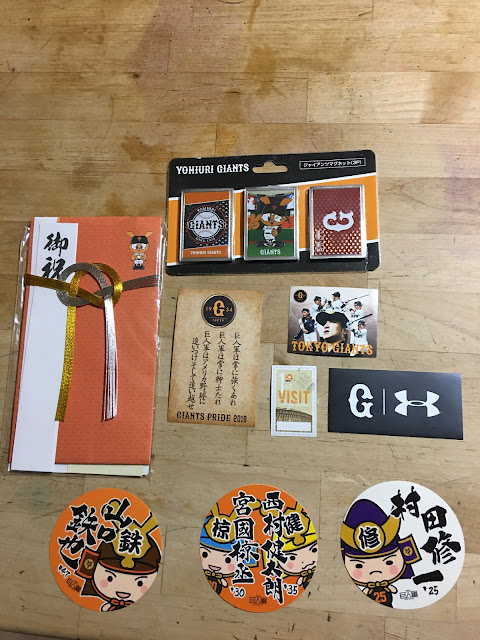 There was a handful of items in the box for the Tokyo Yakult Swallows.  There were two "player nameplate" sticker sheets - one for Tetsuto Yamada and the other for Tsubakurou, the Swallows mascot: 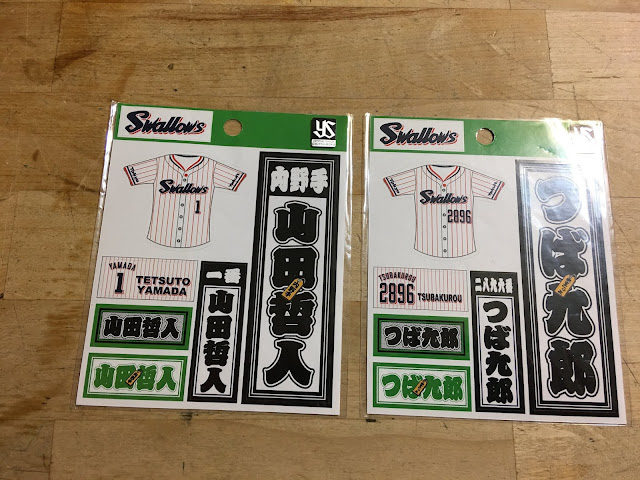 There was a complete Tsubakurou-themed Karuta card game set: 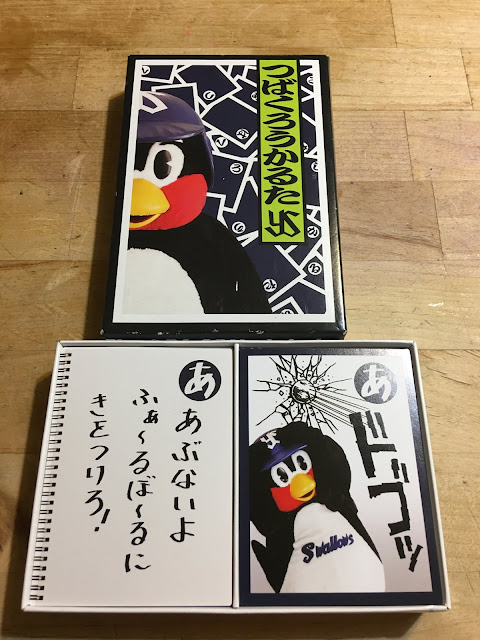 There were a couple items for some sort of cross over between the Swallows and the Ace Of Diamond manga.  The first is this banner showing the manga characters with Yamada and Masanori Ishikawa: 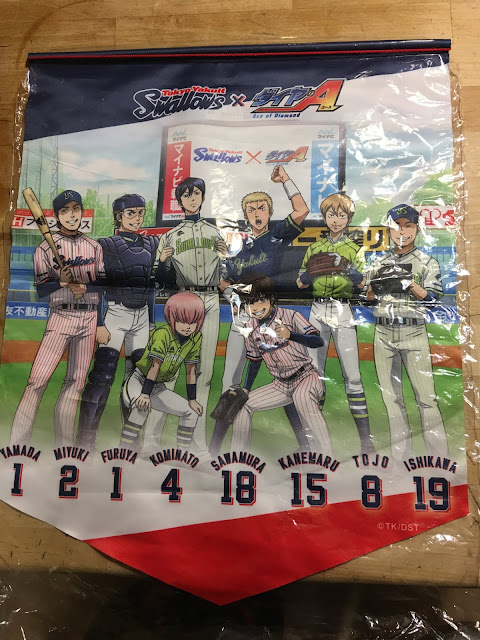 The other item is a mini-towel with the manga characters along with Tsubakurou.  I've also included in this photo an Ichiro item from the box that I think is a case for eyeglasses. 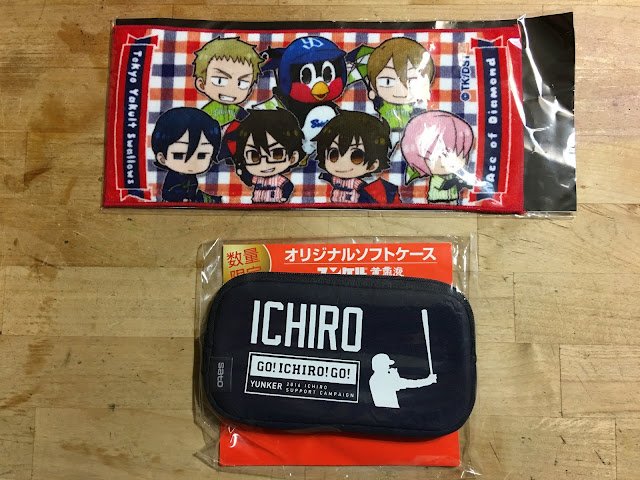 The last items from the box are from the Chiba Lotte Marines and feature the Mysterious Fish mascot.  The top two items are packs containing two stickers - the packs are identical so I can show each of the stickers.  The other item is apparently a roll of tape featuring the fish. 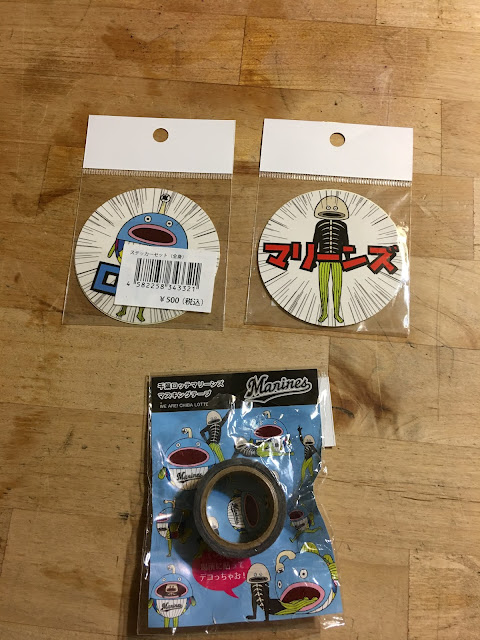 To be honest I have no idea what I'm going to do with most of the stuff.  I'll put the cards and card-sized stickers in with my other Giants team issued cards and probably do the same with the postcards.  And I'll find some place for the WBC bumper stickers.  The rest - who knows?
Posted by NPB Card Guy at 8:47 PM

Oh wow, that is a bunch of random!

Wowza. That's a great deal for $40. Love all of those different sticker sheets.

Those bumper stickers sure are different, not something that you'd ever see in the U.S.! That last group of stickers and tape are pretty interesting too, I'm gonna have to look into that fish mascot, as I think I've fallen in love with him/her/it :)

@Jon - yeah the fish is pretty awesome. He's had a number of cards over the last few years. You can see a number of them at this post

I saved this post six months ago and I'm finally getting around to commenting!

I love those bumper stickers.

For some of those things, someone either spent a lot of money and then decided they didn't want it anymore, or they got some of it on clearance when players left the team or they had leftovers of a design at the end of the year. I got a couple nice Hanshin Tigers souvenirs around New Years because they were super-cheap (old design). Perhaps they were in a fukubukuro in 2013 or 2014.

In the picture with the Baskin-Robins jersey stickers, the thing on the left is just a strap, possibly out of a gacha-gacha machine, for a bag most likely. The thing on the right is a good luck charm called an omamori.

The photo below that with the magnets: the envelope is actually one used for special occasions when giving a monetary gift. I've used a couple of those when going to weddings.

Oddly enough, I picked up that Swallows karuta set a week or two ago! I was hoping for more player photos, but Tsubakurou is on every single card. Still fun.

If you don't want any of that stuff, I wouldn't mind taking it off your hands (just one of any particular type, of course)! Next time I find myself around Tokyo Dome I'll have to see if they sell those omamori, or if they have to be picked up at a shrine. It would be neat to have one for every team.

Overall I think you got a good deal. I don't know where exactly I'll be around New Years next year, but this post reminds me that it might be a good idea to check out team shops in early January for fukubukuro!